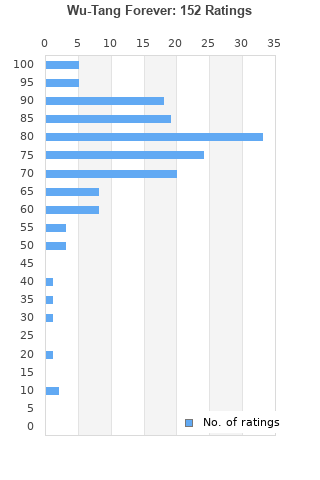 Wu-Tang Forever is ranked 2nd best out of 14 albums by Wu-Tang Clan on BestEverAlbums.com.

The best album by Wu-Tang Clan is Enter The Wu-Tang (36 Chambers) which is ranked number 106 in the list of all-time albums with a total rank score of 14,398. 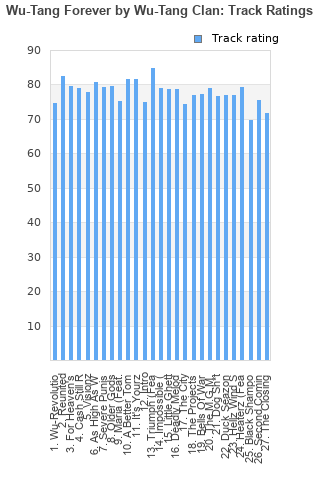 Rating metrics: Outliers can be removed when calculating a mean average to dampen the effects of ratings outside the normal distribution. This figure is provided as the trimmed mean. A high standard deviation can be legitimate, but can sometimes indicate 'gaming' is occurring. Consider a simplified example* of an item receiving ratings of 100, 50, & 0. The mean average rating would be 50. However, ratings of 55, 50 & 45 could also result in the same average. The second average might be more trusted because there is more consensus around a particular rating (a lower deviation).
(*In practice, some albums can have several thousand ratings)
This album is rated in the top 4% of all albums on BestEverAlbums.com. This album has a Bayesian average rating of 77.2/100, a mean average of 76.2/100, and a trimmed mean (excluding outliers) of 77.5/100. The standard deviation for this album is 14.8.

I never remembered enjoying this as much. Bought it the day it came out on vinyl and although it was good it was sprawling and endless (and silibance tastic) and basically it wasn't ob4cl or lz or et36c. Listening now to the cd it's aged wonderfully. Actually most early Wu Tang/early solo has. Brilliant. You can't be into hip hop without loving these 90s Wu Tang rekids. And INS with one of the great verses on Triumph.

Probably my personal favorite double LP of all time.

Worthy of a listen. Double albums are typically misguided projects, but with the 9 strong Wu-Tang Clan (plus Cappadonna), this actually works.

RZA's murky production matches the dark artwork and the one-two punch of As High As Wu-Tang Get and Severe Punishment is the album's peak point.

Track 1 at times is comedy gold. Should have left it off. As strange an opening track as you can hear.

Boyz in the Hood as directed by Akira Kurosawa.

By this point, their solo work had far surpassed what they were doing as a group. Despite that, this is still Grade A hip-hop.

Your feedback for Wu-Tang Forever