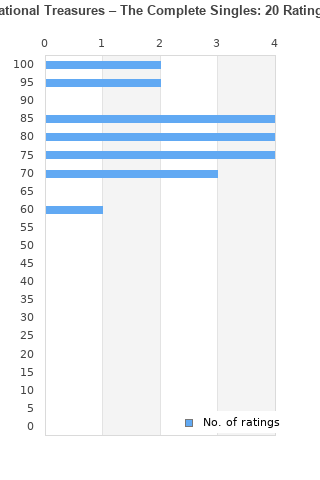 Manic Street Preachers - National Treasures: The Complete Singles (2011) 2CD NEW
Condition: Brand New
Time left: 5d 12h 41m 4s
Ships to: Worldwide
£9.86
Go to store
Product prices and availability are accurate as of the date indicated and are subject to change. Any price and availability information displayed on the linked website at the time of purchase will apply to the purchase of this product.  See full search results on eBay

National Treasures – The Complete Singles is ranked 14th best out of 17 albums by Manic Street Preachers on BestEverAlbums.com.

The best album by Manic Street Preachers is The Holy Bible which is ranked number 412 in the list of all-time albums with a total rank score of 4,765. 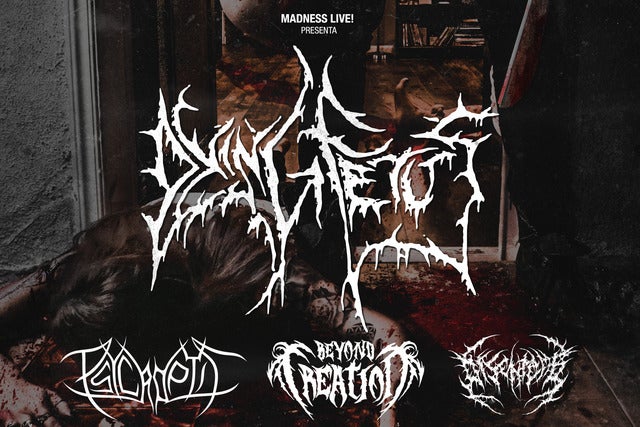 Listen to National Treasures – The Complete Singles on YouTube 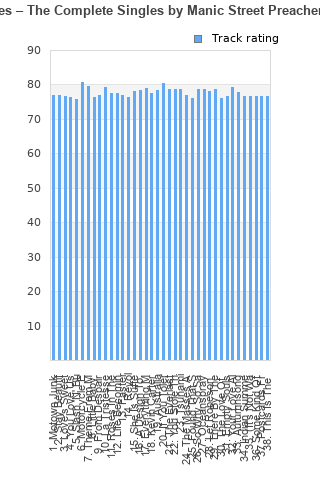 Rating metrics: Outliers can be removed when calculating a mean average to dampen the effects of ratings outside the normal distribution. This figure is provided as the trimmed mean. A high standard deviation can be legitimate, but can sometimes indicate 'gaming' is occurring. Consider a simplified example* of an item receiving ratings of 100, 50, & 0. The mean average rating would be 50. However, ratings of 55, 50 & 45 could also result in the same average. The second average might be more trusted because there is more consensus around a particular rating (a lower deviation).
(*In practice, some albums can have several thousand ratings)
This album is rated in the top 3% of all albums on BestEverAlbums.com. This album has a Bayesian average rating of 77.9/100, a mean average of 80.6/100, and a trimmed mean (excluding outliers) of 80.6/100. The standard deviation for this album is 10.0.

Great compilation, spanning from the Richey Edwards days to Everything Must Go to Send Away The Tigers.

As a fan of The Cardigans it was the song "Your Love Alone Is Not Enough" that really brought me on the track of the band The Manic Streeet Preachers. The song from the album "Send Away the Tigers" provides for me everything I love about the Cardigans - a good catchy melody, a solid rock arrangement and strong vocals - here both from Nina Persson and James Dean Bradfield.

This 2 CD release features the group's singles released between 1990 and 2011 and is a clear testimony that the group's music has evolved and changed several times along the way.

The earliest tracks from the time when the group was still a quartet - guitarist and songwriter Richard Edwards disappeared mysteriously in 1995 - are mostly simple rocksongs wrapped in a punk expression, with lyrics that often have messages at heart. However, even from the early albums also sensitive and melodic songs that may in fact turn out as the most durable can be found. I am thinking of "Motorcycle Emptiness" and "Little Baby Nothing" from the first album. The four singles from second album "Gold Against The Soul" actually all belong to this category - with "Life Becoming a Landslide" as the standout.

The highly acclaimed and dark third album "The Holy Bible" also includes the fine "She is Suffering".

After these albums the group sought more towards a more mainstream rocksound where the listeners were less challenged. However, there were still great singles from all albums among which I personally would highlight tracks like "Tsunami" and "Ocean Spray".

Although the group might periodically have been a slightly burnt out and a little short of new of ideas, the singles from their latest album show and band that is still capeable of coming up with new great rock songs.

As the title "National Treasures - The Complete Singles" shows the focus is solely on the group's singles (A-sides), which means that the overall fine album "Journal For Plague Lovers" from 2009 with surviving lyrics by Richard Edwards is not at all represented. Just too bad for tracks like "Jackie Collins", "This Joke Sport Severed" and "William's Last Words" would have done well in this otherwise fine context..

Among the non abum tracks, it is especially "Suicide is Painless" from 1992 that stands out.

Your feedback for National Treasures – The Complete Singles