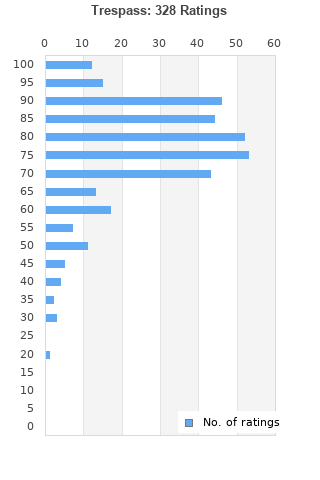 Trespass is ranked 10th best out of 33 albums by Genesis on BestEverAlbums.com.

The best album by Genesis is Selling England By The Pound which is ranked number 127 in the list of all-time albums with a total rank score of 12,898. 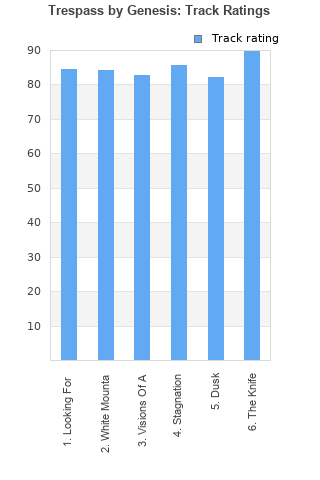 Rating metrics: Outliers can be removed when calculating a mean average to dampen the effects of ratings outside the normal distribution. This figure is provided as the trimmed mean. A high standard deviation can be legitimate, but can sometimes indicate 'gaming' is occurring. Consider a simplified example* of an item receiving ratings of 100, 50, & 0. The mean average rating would be 50. However, ratings of 55, 50 & 45 could also result in the same average. The second average might be more trusted because there is more consensus around a particular rating (a lower deviation).
(*In practice, some albums can have several thousand ratings)
This album is rated in the top 5% of all albums on BestEverAlbums.com. This album has a Bayesian average rating of 76.7/100, a mean average of 76.2/100, and a trimmed mean (excluding outliers) of 76.8/100. The standard deviation for this album is 14.3.

This is where the Genesis legend began! It's a little rough around the edges because they were just starting out, but there are still amazing songs like Stagnation and the legendary concert closer The Knife! Worth a listen once in a while.

The acoustic guitar on this album is exquisite. I love the introduction of Looking For Someone, it immediately engages you and hooks you in. My standout is Stagnation, it melts you like butter on hot toast. The drumming isn't great and the timing a Mr Collins would have brought to this album may have made it one of the all time great debut albums.

Certainly underrated. The Knife and Stagnation are classics. The rest is decent enough, with the exception of the great Looking for Someone.

Most regard this as the first "proper" Genesis record, fitting more obviously the style of progressive rock for which they became known, though many also feel it is more of a transitional album, than anything polished and complete. The previous album had 6 or 7 tracks per side, this has six tracks in all. The music is slow and dreamy for the first five tracks, and the lyrics are vague stories which don't relate to me or my life, and are not interesting or well constructed. They're all fairly dreary and boring, but the last track, "The Knife", has energy and variety, with Phillips' sharp guitar work over Rutherford's church organ. It's also probably the most "prog" of all the tracks. The band continued to use the song in their live shows, and it appears on their 1973 live album, with the classic line up; and it appears in a filmed recording of a live concert that same year in Paris, and in a filmed recording of a concert in London in 1980 with Collins doing the vocal.
The album matches the mood and sound of recent work from other contemporary prog (or related) artists - Yes (1969), In the Court of the Crimson King (1969), Moondog (1969), Caravan (1969), The Least We Can Do Is Wave to Each Other (Feb 1970) - the period 1969/1970 was key in the emergence of progressive rock

A big step in the right direction for what would soon become one of progressive rock's defining groups. Although a little uneven in spots, you can tell that Genesis plays with a lot more confidence than on their debut, and it shows on standout tracks like White Mountain and especially The Knife, one of the best songs that Genesis ever made. It also helps wonders that Genesis' production value skyrocketed between From Genesis to Revelation and Trespass. This is truly where the legend of prog Genesis began. The two aforementioned tracks are essential listening. Everything else here is recommended.

I am so glad to see others acknowledging this album as a criminally underrated classic. It's in a weird place of history for the band, and served as a transition into what they would be known for, and people seemed to write it off because they assume it was just the band testing the waters of progressive rock. That's not true at all, this is a great progressive folk/rock album in it's own right, with a wistful and beautiful caressing feel to all of the songs, with the exception of The Knife, which is the bands first real banger and is still one of their best songs ever. Anthony Phillips really proved himself here as a guitarist, and I think the band still could have achieved most of their success if he never left. This is not a diss to the great Steve Hackett in any way, just saying Anthony was incredible as well. Please listen to this album fellow skeptical Genesis fans, it's still better than the Phil Collins era albums, and it's just as good as Nursery Cryme at the very least IMO.

Yes, that's correct Streakynuno. Number one falls within the top 10. My chart whole chart is definitive (though it periodically changes), by the way.

IN THE Top 10 of BEST ALBUNS EVER

The greatest album of all time. Anyone who disagrees with me is wrong.

Your feedback for Trespass