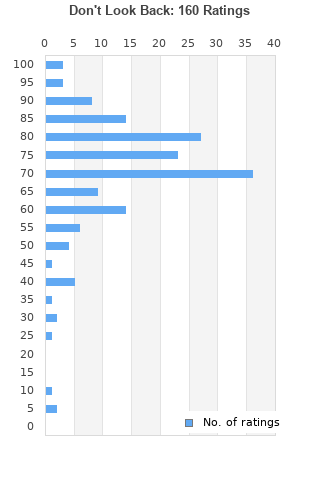 Don't Look Back is ranked 2nd best out of 8 albums by Boston on BestEverAlbums.com.

The best album by Boston is Boston which is ranked number 284 in the list of all-time albums with a total rank score of 6,651. 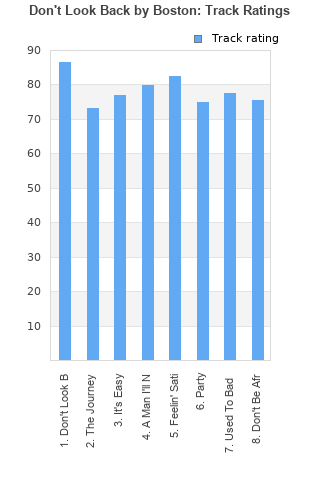 Rating metrics: Outliers can be removed when calculating a mean average to dampen the effects of ratings outside the normal distribution. This figure is provided as the trimmed mean. A high standard deviation can be legitimate, but can sometimes indicate 'gaming' is occurring. Consider a simplified example* of an item receiving ratings of 100, 50, & 0. The mean average rating would be 50. However, ratings of 55, 50 & 45 could also result in the same average. The second average might be more trusted because there is more consensus around a particular rating (a lower deviation).
(*In practice, some albums can have several thousand ratings)
This album has a Bayesian average rating of 71.7/100, a mean average of 70.4/100, and a trimmed mean (excluding outliers) of 71.6/100. The standard deviation for this album is 16.3.

Professionals all the way. Nothing sucks on this album. 85

It ended on a good note!

I was pretty pleased with this album when I first heard it, but have long since outgrown it for the most part. That said it does have some good songs, and while it may not be a match for their first, it's far better than what followed.

Everything I didn't like about their debut album, magnified.

Not bad, but not nearly as good as their first. My favorite songs are Used to Bad News and A Man I'll Never Be. This album's song titles alternate between positive and negative. Not sure what was going on with the band on a personal level (though I know they had their legal troubles) but someone sure seems conflicted, based on the song titles and lyrics.

I only listened to this album once. So my score is pretty arbitrary. I can sort of dig it.

Your feedback for Don't Look Back