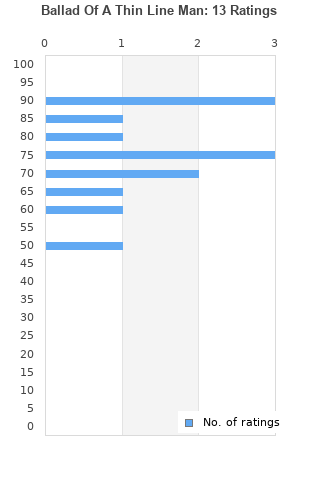 Ballad Of A Thin Line Man is ranked 8th best out of 26 albums by Giant Sand on BestEverAlbums.com.

The best album by Giant Sand is Chore Of Enchantment which is ranked number 9674 in the list of all-time albums with a total rank score of 120. 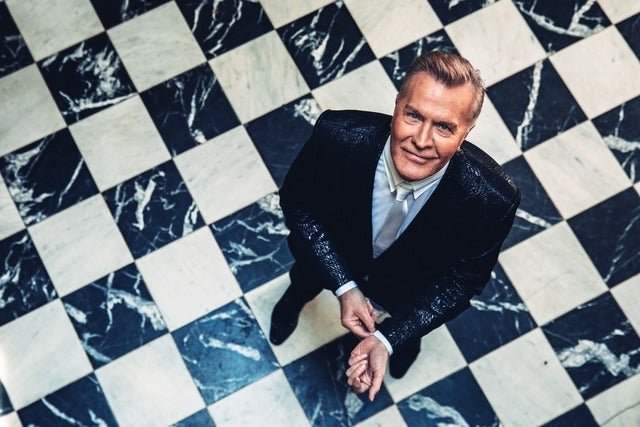 Listen to Ballad Of A Thin Line Man on YouTube 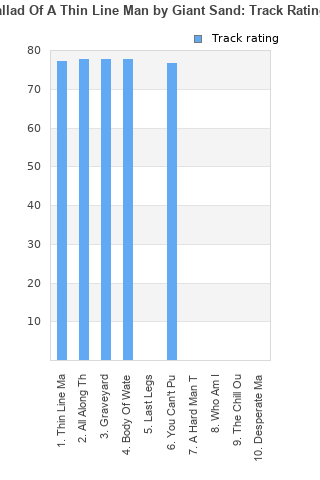 0
7.
A Hard Man To Get To Know
Rating: Not enough dataComments:

0
8.
Who Am I
Rating: Not enough dataComments:

0
9.
The Chill Outside
Rating: Not enough dataComments:

Rating metrics: Outliers can be removed when calculating a mean average to dampen the effects of ratings outside the normal distribution. This figure is provided as the trimmed mean. A high standard deviation can be legitimate, but can sometimes indicate 'gaming' is occurring. Consider a simplified example* of an item receiving ratings of 100, 50, & 0. The mean average rating would be 50. However, ratings of 55, 50 & 45 could also result in the same average. The second average might be more trusted because there is more consensus around a particular rating (a lower deviation).
(*In practice, some albums can have several thousand ratings)
This album is rated in the top 20% of all albums on BestEverAlbums.com. This album has a Bayesian average rating of 74.6/100, a mean average of 75.8/100, and a trimmed mean (excluding outliers) of 75.8/100. The standard deviation for this album is 11.7.

Love their sound. If all the songs kicked as much ass as Body of Water this would be perfect.

For me, its the perfect Giant Sand album. Its got that lo-fi alt-country (before there was such a thing) bluesy rock thing going on. Howe Gelb's voice sounds drenched in alcohol and the desert. But mostly, it's got fabulous songs: Thin Line Man,Graveyard, Body of Water plus possibly the greatest ever version of All Along the Watchtower!!

Your feedback for Ballad Of A Thin Line Man