Will The Circle Be Unbroken (album) by Nitty Gritty Dirt Band 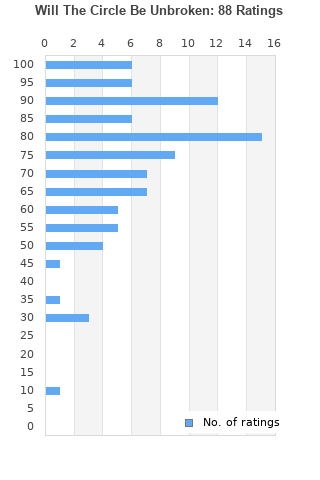 Will The Circle Be Unbroken is ranked as the best album by Nitty Gritty Dirt Band.

Listen to Will The Circle Be Unbroken on YouTube 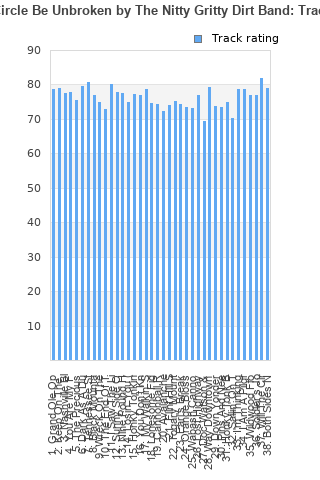 Will The Circle Be Unbroken rankings

Will The Circle Be Unbroken collection

Will The Circle Be Unbroken ratings

Outliers can be removed when calculating a mean average to dampen the effects of ratings outside the normal distribution. This figure is provided as the trimmed mean. A high standard deviation can be legitimate, but can sometimes indicate 'gaming' is occurring. Consider a simplified example* of an item receiving ratings of 100, 50, & 0. The mean average rating would be 50. However, ratings of 55, 50 & 45 could also result in the same average. The second average might be more trusted because there is more consensus around a particular rating (a lower deviation).
(*In practice, some albums can have several thousand ratings)
This album is rated in the top 17% of albums on BestEverAlbums.com. This album has a mean average rating of 75.0/100. The trimmed mean (excluding outliers) is 75.3/100. The standard deviation for this album is 17.8.

Will The Circle Be Unbroken favourites

Will The Circle Be Unbroken comments

The Nitty Gritty Dirt Band was a precursor and influencer of Country Rock bands like The Eagles, and their sound coalesed on this album. Formed in California a few years earlier as a jug band in the vein of The Grateful Dead, their music drifted further and further toward country and bluegrass as the years rolled on. They recorded this album in Nashville with special guest made up of country and bluegrass legends. When the dust settled they had a triple LP (Double CD) full of material. The version of the title cut (with multiple artists contributing a verse and collective chorus) is probably the definitive version ever recorded. It is worth seeking out. While the style of music is not my cup of tea, my record collection would not be complete without this album.

Tracks sound great but not enough variation for a full 100. Instrumentals on disc 2 are great!

How did I not know about this? A sprawling collection of the bluegrass masters. Amazing in breadth and skills on display.

This is one of my favorite albums of all time. If you like traditional country music this is a must have set.

This is an essential album in traditional country and American roots music...but it is way too long. The band realized this when they released it, so they pressed the first and last side on the same record. These two sides (tracks 1-6 and 33-38) play like a regular length LP. Play those tracks first and if you like what you hear, listen to the rest.

This is as pure as rural music gets.

The Dirt Band was a bunch of country rock hippies who loved the old music. They started asking their idols if they would make guest appearances on their next album, and before they knew it, they had a 3 record monster of great songs and guest appearances from some of the greatest then living legends of country and bluegrass. The guest list is astounding and long, and includes the likes of Roy Acuff, Mother Maybelle Carter, Doc Watson, Merle Travis, and on and on. The album also introduced fiddle player Vassar Clements to the masses. The songs were all recorded in 1 or 2 takes, and include a lot of pre song dialogue.

This is the ultimate melding of country, bluegrass and rock. An absolute masterpiece.

Your feedback for Will The Circle Be Unbroken