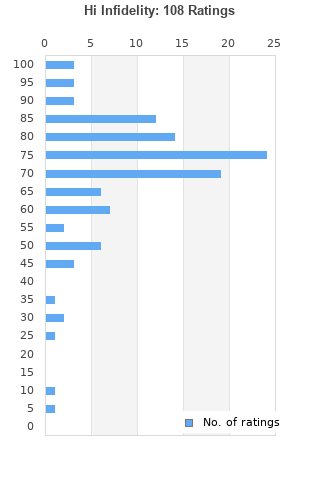 REO SPEEDWAGON - HI INFIDELITY: Record
Condition: Very Good
Time left: 8h 40m 55s
Ships to: Worldwide
$15.00
Go to store
Product prices and availability are accurate as of the date indicated and are subject to change. Any price and availability information displayed on the linked website at the time of purchase will apply to the purchase of this product.  See full search results on eBay

Hi Infidelity is ranked as the best album by REO Speedwagon. 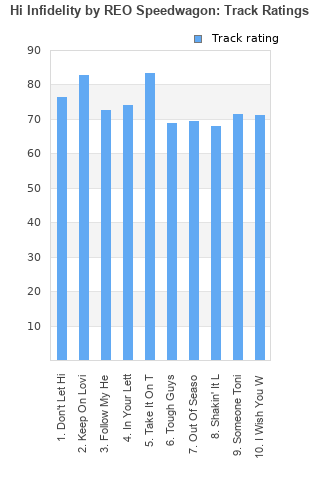 Rating metrics: Outliers can be removed when calculating a mean average to dampen the effects of ratings outside the normal distribution. This figure is provided as the trimmed mean. A high standard deviation can be legitimate, but can sometimes indicate 'gaming' is occurring. Consider a simplified example* of an item receiving ratings of 100, 50, & 0. The mean average rating would be 50. However, ratings of 55, 50 & 45 could also result in the same average. The second average might be more trusted because there is more consensus around a particular rating (a lower deviation).
(*In practice, some albums can have several thousand ratings)
This album has a Bayesian average rating of 71.1/100, a mean average of 70.1/100, and a trimmed mean (excluding outliers) of 70.8/100. The standard deviation for this album is 16.3.

I totally understand the comments about abandoning being a rock band. And sure, outside of the hits, the album tracks are average. But boy, did this album get a lot of playing time, and that is what my chart is all about :-)

This is where REO finally abandoned any pretense of being a real rock and roll band and came out as a full-fledged radio-friendly power ballad coroporate rock mess. But hey, it did wonders for the ol' bank account.

Decent guitar work, but songwriting blows chunks. A couple good "hits" and then a total waste of my time.

1981 would mark the peak of arena rock -- corporate rock to the critic class. Between them, Hi Infidelity, Foreigner 4, Styx's Paradise Theater, and Journey's Escape sold approximately 30 million units. This November 1980 release kicked things off with a mix of power balladry and hard rock with pop sensibilities. It's always been easy to bash this style of music but I've never seen the point. The above bands were generally proficient musicians, fronted by very capable vocalists, and wrote songs that were just plain catchy. It's the height of snobbery to disparage them just because the "wrong" people bought their music.

Thirty five years later, Hi Infidelity is a still a good listen. The radio-friendly hits are familiar to everyone, but side two continues with some fairly strong material. "Out of Season" in particular is a well-crafted song.

I thought Hits was the only REO Speedwagon I needed. I was wrong--I need this one too.

The first signs of change in musical style. At the very beginning of the eighties but still going strong influence past the seventies.

One of the early 80s arena rock classics! That middle ground between Zeppelin and the 80s hair metal bands.

If you were in high school in the early 80's, you had this album. May be a bit dated now, but this was certainly one of the soundtracks of that era.

Your feedback for Hi Infidelity