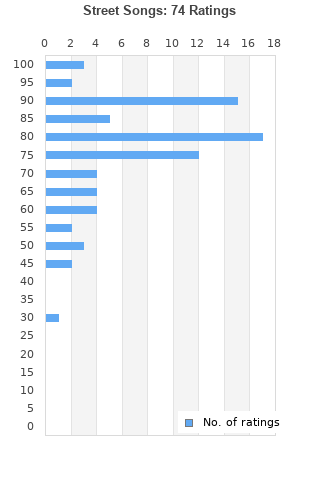 RICK JAMES Street Songs 2002 USA CD album reissue 2 bonus 12" mixes motown
Condition: Very Good
Time left: 1d 15h 28m 41s
Ships to: Worldwide
$9.00
Go to store
Product prices and availability are accurate as of the date indicated and are subject to change. Any price and availability information displayed on the linked website at the time of purchase will apply to the purchase of this product.  See full search results on eBay

Street Songs is ranked as the best album by Rick James. 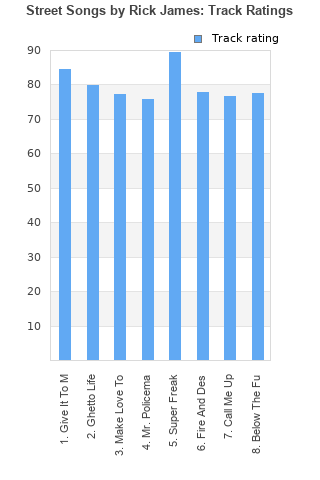 Rating metrics: Outliers can be removed when calculating a mean average to dampen the effects of ratings outside the normal distribution. This figure is provided as the trimmed mean. A high standard deviation can be legitimate, but can sometimes indicate 'gaming' is occurring. Consider a simplified example* of an item receiving ratings of 100, 50, & 0. The mean average rating would be 50. However, ratings of 55, 50 & 45 could also result in the same average. The second average might be more trusted because there is more consensus around a particular rating (a lower deviation).
(*In practice, some albums can have several thousand ratings)
This album is rated in the top 4% of all albums on BestEverAlbums.com. This album has a Bayesian average rating of 77.5/100, a mean average of 77.4/100, and a trimmed mean (excluding outliers) of 78.1/100. The standard deviation for this album is 14.5.

A solid funky R&B album that never dips in its high quality. From front to back, "Street Songs" is an absolute delight and deserves a lot more attention on this site.

This is RJ's best album. Give it Me Baby and Super Freak are classic dance songs. Ghetto Life and Mr. Policemen are socially conscious funk. Make Love to Me and Fire and Desire are slow jams. This has a lot for everyone and deserves more respect on this site.

Jhereko - well done. Just what I was thinking.

Cocaine is a hell of a drug.

Current rap and pop stars can try to brag about how hard they are, but this man not only lived "the life" but bragged about it every moment he could. Pretty much the only things on Rick James' mind are where he's getting his next drink, his next line, and his next girl. He can afford to do this because he had one of the greatest voices and knew how to produce some killer beats. This album contains two of the greatest songs ever, so it's probably fair to say it deserves better than it's getting here.

Your feedback for Street Songs