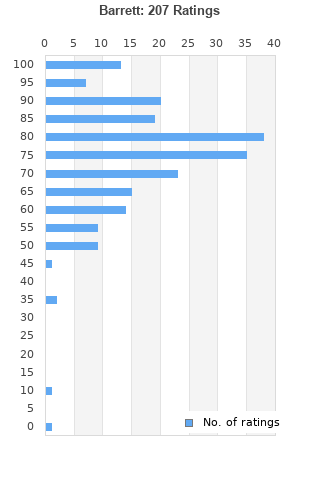 BARRET BY SYD BARRETT USED 1993 SEVENTIES ROCK UK CD ALBUM.
Condition: Good
Time left: 36m 59s
Ships to: Worldwide
£1.04
Go to store
Product prices and availability are accurate as of the date indicated and are subject to change. Any price and availability information displayed on the linked website at the time of purchase will apply to the purchase of this product.  See full search results on eBay

Barrett is ranked 2nd best out of 8 albums by Syd Barrett on BestEverAlbums.com.

The best album by Syd Barrett is The Madcap Laughs which is ranked number 966 in the list of all-time albums with a total rank score of 1,950. 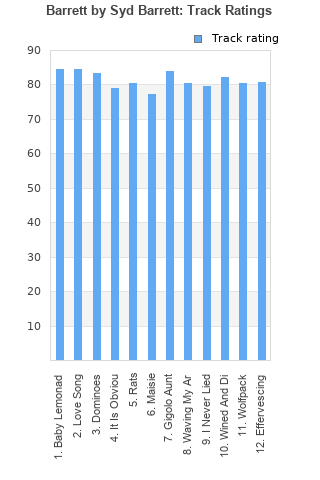 Rating metrics: Outliers can be removed when calculating a mean average to dampen the effects of ratings outside the normal distribution. This figure is provided as the trimmed mean. A high standard deviation can be legitimate, but can sometimes indicate 'gaming' is occurring. Consider a simplified example* of an item receiving ratings of 100, 50, & 0. The mean average rating would be 50. However, ratings of 55, 50 & 45 could also result in the same average. The second average might be more trusted because there is more consensus around a particular rating (a lower deviation).
(*In practice, some albums can have several thousand ratings)
This album is rated in the top 7% of all albums on BestEverAlbums.com. This album has a Bayesian average rating of 76.5/100, a mean average of 75.5/100, and a trimmed mean (excluding outliers) of 76.6/100. The standard deviation for this album is 16.0.

A great psychedelic album, I hear more with each listen. Some tracks are better than others and I accept that David Gilmour and Richard Wright had a lot to do with the sound. 'Baby Lemonade', 'Dominoes' and 'Gigolo Aunt' are personal favourites.

Hmmmm .... Well, upon first listen, this might seem to actually be a better album than Madcap. The compositions are as zany as ever, with playful lyrics and simply bizarre melodies. Also, the backup band here (including Gilmour and Wright) has made sure to augment Syd's wackiness with some actual, solid arrangements. Sounds all good, right?
Well, no actually, it doesn't. The album may theoretically sound like an improvement over Madcap, but the problem is that it "improves" on Madcap in exactly the wrong way. Barrett's mental condition had only gotten worse since Madcap, which shows itself in some of the lyrics getting even nuttier than before, yet instead of emphasizing that aspect of Syd (which was very arguably just as crucial to his shtick as the actual songs were), Gilmour and Wright tried to mask this and make him appear as a relatively normal singer-songwriter (ha). Even more irritating is that the way they went about this was to make it sound somewhat like the contemporary Floyd albums (which I quite like, mind you), but with only about a tenth of the creative energy that went into Atom Heart Mother. The best example of this is the otherwise quite decent "Gigolo Aunt," where Wright spends what seems like forever after the main song has ended puttering with one of the most boring organ jams I can possibly conceive. Yet even when the Floyders aren't outright stealing time from Syd (like with the album's rolling 12-string guitar intro, which is nice but has absolutely nothing to do with what Barrett could do at the time), the dull organy arrangements often sound totally incompatible with Syd's childish ramblings, and that's bothersome to me.
It's especially saddening to me that a good number of the songs here are right on the level of the best stuff from Madcap, and that I consequently somewhat long for the Soft Machine to come back and trip over themselves trying to follow Syd's nuttiness. The opening triad of "Baby Lemonade," "Love Song" and "Dominoes" are terrific melody-wise, and "Dominoes" is even nice enough to have some chaotic sliding guitar noise softly happening in the background that adequately reminds us that we're listening to freaking Syd Barrett and not Jimmy Buffett. I'm also a big fan of "Wined and Dined," which likely would have been a hit in the hands of a less cultish artist, with a simple-but-effective main melody that can't help but stick in my head for hours on end after hearing it. And, now that I think about it, "Waving My Arms in the Air" is a nice little ditty too.
Unfortunately, the signs of serious decline are apparent over much of the rest of the album. Some of the songs are just kinda dull, but without the kind of eccentricity that showed up in the second half of Madcap. And then there's "Rats" and "Wolfpack," the two instances where Syd's madness are shown totally uncut. I know it's hypocrisy to have complained that the rest of the album made an attempt to mask his madness, and then to complain when the producer doesn't mask it, but these tracks don't show a genius turning into a madman; they just show a madman. It's an important part of his legacy, yes, but only as the sad conclusion to his decline.
So in short, this here is one massively uneven album. It helps considerably that it ends with a song that Syd wrote when he was 12, called "Effervescing Elephant," which puts his silly ditty skills on display front and center, but one clear dose of genius does not an album make. I give it an 8 because there are quite a few nice gems on here, but unless you're already a big fan of Madcap, it's hard for me to give it a serious recommendation.

My favourite of the two Barrett studio albums, and better than the Barrett led Floyd albums too. I love the whole sound of this album and it seems to get better with every listen. Classic.

Not quite up to the quality of The Madcap Laughs but the difference is really only very slight.

Again the list of great tracks seems to be quite significant - Dominoes, Love Song, Wined And Dined, Gigolo Aunt etc. In fact over the two albums there is only Maisie which I don't particularly like, the segue from Waving My Arms In The Air into I Never Lied To You is brilliant.

Your feedback for Barrett