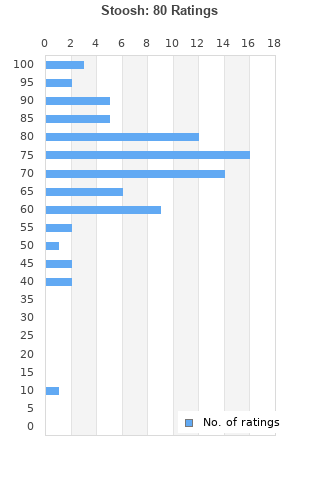 Stoosh is ranked as the best album by Skunk Anansie. 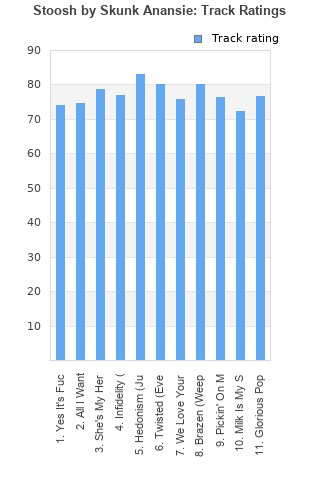 Rating metrics: Outliers can be removed when calculating a mean average to dampen the effects of ratings outside the normal distribution. This figure is provided as the trimmed mean. A high standard deviation can be legitimate, but can sometimes indicate 'gaming' is occurring. Consider a simplified example* of an item receiving ratings of 100, 50, & 0. The mean average rating would be 50. However, ratings of 55, 50 & 45 could also result in the same average. The second average might be more trusted because there is more consensus around a particular rating (a lower deviation).
(*In practice, some albums can have several thousand ratings)
This album has a Bayesian average rating of 73.2/100, a mean average of 72.5/100, and a trimmed mean (excluding outliers) of 73.3/100. The standard deviation for this album is 14.4.

A few good tracks on this. However I found most songs just seemed to lack a certain kick; no oomph. Overall it's a decent album but nothing spectacular.

Almost an all-time classic. The opening one-two of "...Political" (all my least favourite SA tracks are those with a blatant political stance) and the cliched "All I Want" are the biggest false start to an album ever. From there, it's chilling and soaring all the way until the penultimate track... the guttural riff & Skin's demented howl deserve a better overall song than "Milk Is My Sugar". A bit of fantasy tracklisting, delving into the future, but substitute "Charlie Big Potato", "I Will Break You", and "Secretly" from elsewhere in their catalogue for the aforementioned three, and you're seriously talking best album of the 90s contender.