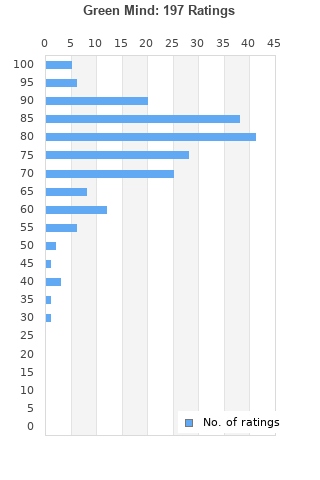 DINOSAUR JR - GREEN MIND - 1991 - MUSIC ADVERT 28 x 19 CM WALL ART
Condition: Very Good
Time left: 18h 48s
Ships to: Worldwide
£3.00
Go to store
Product prices and availability are accurate as of the date indicated and are subject to change. Any price and availability information displayed on the linked website at the time of purchase will apply to the purchase of this product.  See full search results on eBay

Green Mind is ranked 4th best out of 19 albums by Dinosaur Jr. on BestEverAlbums.com.

The best album by Dinosaur Jr. is You're Living All Over Me which is ranked number 300 in the list of all-time albums with a total rank score of 6,631. 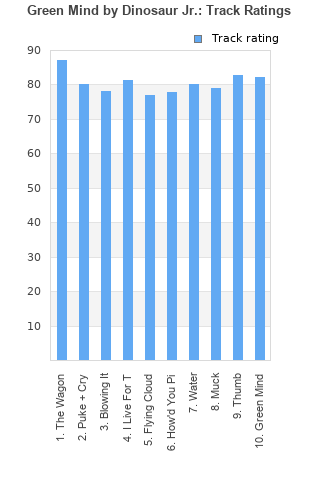 Rating metrics: Outliers can be removed when calculating a mean average to dampen the effects of ratings outside the normal distribution. This figure is provided as the trimmed mean. A high standard deviation can be legitimate, but can sometimes indicate 'gaming' is occurring. Consider a simplified example* of an item receiving ratings of 100, 50, & 0. The mean average rating would be 50. However, ratings of 55, 50 & 45 could also result in the same average. The second average might be more trusted because there is more consensus around a particular rating (a lower deviation).
(*In practice, some albums can have several thousand ratings)
This album is rated in the top 3% of all albums on BestEverAlbums.com. This album has a Bayesian average rating of 78.2/100, a mean average of 77.5/100, and a trimmed mean (excluding outliers) of 78.4/100. The standard deviation for this album is 12.1.

Very underrated, more people should give it a try. This is one of the best and most cohesive Dinosaur Jr albums.

Beginning of Dinosaur Jr. going downhill after Lou Barlow left. Some good songs here and there (The Wagon, Puke + Cry, How'd You Pin That One On Me), the rest is mediocre.

Extremely underrated, an essential album for anyone who enjoys alternative.

The music scene in Amherst/Northampton, Massachuetts, back in the late eighties and early nineties has to have produced more great bands per capita than any other in history. J Mascis is one of rock history's greatest under-the-radar guitar gods, underrated perhaps because his extravagant soloing contrasts in such an extreme way with his underachieving slacker vocal style. I'm going a little against the grain here by choosing Green Mind as Dinosaur Jr.'s best album, but I've got to call this one as I see it: I prefer the tight instrumentation and relatively clean production here to the sludgy, sloppy (if wonderful) mess that is You're Living All Over Me. It's not like the band "sold out" or lost its identity on this album (or, really, any of their albums)--and really, can any album whose best song is called "Puke + Cry" really be considered overproduced for mass consumption?

No sell-out (despite the accusations) here. Another stellar alt-rock gem.

Your feedback for Green Mind