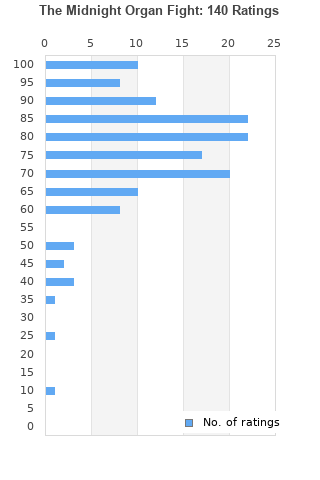 The Midnight Organ Fight is ranked as the best album by Frightened Rabbit. 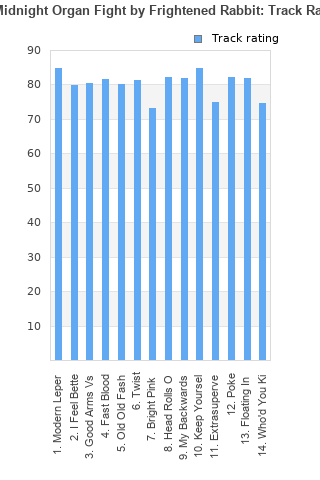 Rating metrics: Outliers can be removed when calculating a mean average to dampen the effects of ratings outside the normal distribution. This figure is provided as the trimmed mean. A high standard deviation can be legitimate, but can sometimes indicate 'gaming' is occurring. Consider a simplified example* of an item receiving ratings of 100, 50, & 0. The mean average rating would be 50. However, ratings of 55, 50 & 45 could also result in the same average. The second average might be more trusted because there is more consensus around a particular rating (a lower deviation).
(*In practice, some albums can have several thousand ratings)
This album is rated in the top 4% of all albums on BestEverAlbums.com. This album has a Bayesian average rating of 77.4/100, a mean average of 76.8/100, and a trimmed mean (excluding outliers) of 77.7/100. The standard deviation for this album is 15.3.

Decent album, not a single "bad" song on here but I also found it incredibly boring.

There are some fabulous tracks in the 1st half but things do drag on too much in the 2nd half & ultimately is too long clocking in at exactly 1 hour . Every track bar 1 is about "The Break Up " and it all gets too depressing in the last 3rd of this album

Look TBH I rather like this album but it does have its flaws preventing it from being truly great, its NOT a "modern classic " as one critic has described it

Still their best. Caught between poignant and funny, simple and profound. And catchy as hell.

Well that was certainly wonderful! Heart wrenching and truthful, singer has a lot to sing about. Album is a little top heavy... can't let that worry me though, there are great moments on here.

A thinking mans album. Witty, clever, upfront lyrics about love and sex that hit straight to the heart. Reflective melodies that at times echo the cure poppier moments, good mix of pace, all sung in a passionate distinct Scottish accent. This is a must album to hear, is a grower too. Will be recognised as one of greatest ever albums in time.

Probably the best and most accurate description of dealing with a break up in recent years. The lead singer is so painfully honest that its impossible not to feel pity towards him and to root for him. I quite like this album. I wish it was rated higher.

"Midnight Organ Fight" is perhaps the best euphemism for sex ever coined. The album is great, too.

This is a tough one, because while I don't like or don't really have an opinion on half the songs here, the other half I can count among the best songs I've heard in a very, very long time. Ultimately I think being sublime in small doses counts for more than being consistently mediocre.

Your feedback for The Midnight Organ Fight