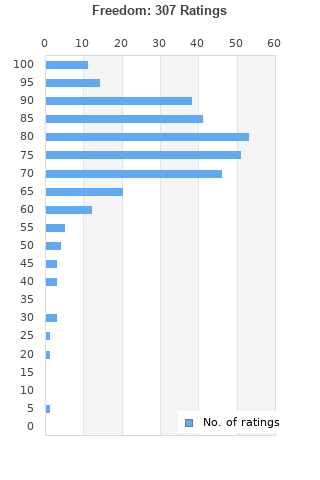 NEIL YOUNG freedom LP EX/VG-, WX 257, vinyl, album, with lyric inner, folk rock
Condition: Used
Time left: 13h 24m 26s
Ships to: Worldwide
$98.18
Go to store
Product prices and availability are accurate as of the date indicated and are subject to change. Any price and availability information displayed on the linked website at the time of purchase will apply to the purchase of this product.  See full search results on eBay

Freedom is ranked 6th best out of 79 albums by Neil Young on BestEverAlbums.com.

The best album by Neil Young is After The Gold Rush which is ranked number 79 in the list of all-time albums with a total rank score of 18,873. 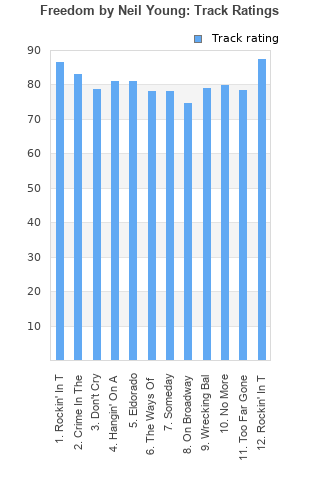 Rating metrics: Outliers can be removed when calculating a mean average to dampen the effects of ratings outside the normal distribution. This figure is provided as the trimmed mean. A high standard deviation can be legitimate, but can sometimes indicate 'gaming' is occurring. Consider a simplified example* of an item receiving ratings of 100, 50, & 0. The mean average rating would be 50. However, ratings of 55, 50 & 45 could also result in the same average. The second average might be more trusted because there is more consensus around a particular rating (a lower deviation).
(*In practice, some albums can have several thousand ratings)
This album is rated in the top 3% of all albums on BestEverAlbums.com. This album has a Bayesian average rating of 77.9/100, a mean average of 76.9/100, and a trimmed mean (excluding outliers) of 78.0/100. The standard deviation for this album is 13.8.

This album just feels rather bland on the whole and he doesn't really experiment with his sound at all. There are a couple of great tracks on here, such as the closer, but it just doesn't have that consistency to be considered amongst his best. Every song sounds pretty similar and a bit boring and like he has run out of ideas. The vocal is the main strength with it being pretty good throughout but once again nothing ground breaking. The guitar work also shines at points in some songs. It is a hard album to rank as it isn't really bad as you can definitely listen to it and find some enjoyable moments in there but it also isn't really good in terms of musical quality as it is one note and dull. Overall, it is just such an average album in my opinion and not one I find myself wanting to listen to again after the few listens I have had.

Much has been said about Neil Young's experimentation in the 1980s.

As a fan, it was decent work. It looks like many listeners are just not satisfied unless Neil reprises his role as either a country-folk acoustic troubadour or rocks out with Crazy Horse.

I enjoyed Neil's dynamic 1980s experimentation and it was nice to hear some return to form for this record.

Never mind style. Neil is his best when he has a strong set of songs that don't go on too long. Aside from the Rockin' in the Free World crowd-pleaser, there are excellent songs here like Hangin' on a Limb and Wrecking Ball.

The production doesn't stray too far from the country-folk he is known for, and it mostly keeps its role of supporting the songs instead of distracting the listener.

A Side: Rockin' in the Free World
B Side: Wrecking Ball

A fine enough record. It is undeniably his best of the 80s, but the bar is set pretty damn low. This album does feature Rockin' in the Free World, an absolute anthem. Other than that, the music is fairly uninteresting, but not without highlights (Crime In the City, Eldorado).

Not spectacular, but certainly the best Neil Young album since, rust never sleeps. Rockin' in the free world is one of Young's greatest ever songs. The rest isn't bad either.

After 6 rather disappointing studio albums in the 80's he left Geffen records and returned to Reprise and a great return to form with this album. Great album there are elements of rock, folk, country everything Neil Young is good at.

Rather average. Nothing clicks on me.

Junodog sums it up very well. Another great Neil album, arguably amongst the 10 best of his career to date.

Your feedback for Freedom