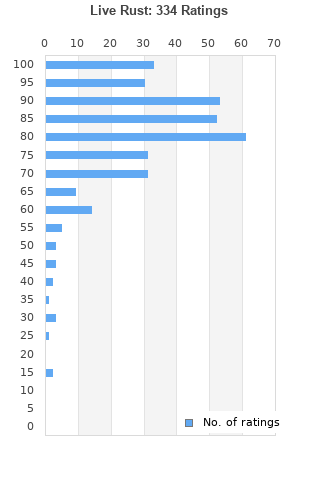 Live Rust is ranked 4th best out of 21 albums by Neil Young & Crazy Horse on BestEverAlbums.com.

The best album by Neil Young & Crazy Horse is Everybody Knows This Is Nowhere which is ranked number 215 in the list of all-time albums with a total rank score of 8,838. 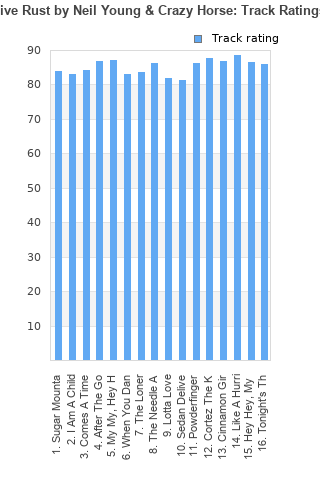 Rating metrics: Outliers can be removed when calculating a mean average to dampen the effects of ratings outside the normal distribution. This figure is provided as the trimmed mean. A high standard deviation can be legitimate, but can sometimes indicate 'gaming' is occurring. Consider a simplified example* of an item receiving ratings of 100, 50, & 0. The mean average rating would be 50. However, ratings of 55, 50 & 45 could also result in the same average. The second average might be more trusted because there is more consensus around a particular rating (a lower deviation).
(*In practice, some albums can have several thousand ratings)
This album is rated in the top 1% of all albums on BestEverAlbums.com. This album has a Bayesian average rating of 81.5/100, a mean average of 80.7/100, and a trimmed mean (excluding outliers) of 81.7/100. The standard deviation for this album is 14.6.

An excellent live album with a good variety of acoustic numbers and some hard rocking jams with Crazy Horse. The tracks range from early stuff to tunes off the recently released Rust Never Sleeps. The album even kicks it up a notch on the back half.

Key tracks: Like a Hurricane, Cortez the Killer and Tonight's the Night

I bought this album many years ago, possible late 70". Right away i really like it. Most of the live version are better than studio versions. Neil and Crazy Horse really show that they could rock with the best of them. Still think that the live Zeppelin albums are better.

Along with Nirvana's MTV unplugged this is the best LIVE album I've ever listened. Most of the songs here sounds even better than on the original album.

I loved this record upon first listen some 32 years ago. I love the acoustic half equally with the electric half. "Powderfinger" being the absolute highlight. "The Loner" & "Like a Hurricane" rival it though. Least fav track "Sedan Delivery". What an album! It will always hold a special place and I return to it often. Best of both Neils acoustic & electric & I really love Live albums & live music. Highly reccommended! MEZ

What a live performance. Neil Young shows the world that he can rock with the best of them. I don't usually like live albums, but when I do, I prefer Live Rust.

Released 5 months after Rust Never Sleeps, an almost live album with studio overdubs and removed crowd noise, Young released the fully live Live Rust. Starting off with Young playing solo, he is joined by Carzy Horse and turns in a rocking performance. The song selection is key, and it's mostly great here (although "Lotta Love" sounds out of place). From "Sedan Delivery" on, it's all rock. "Powderfinger" (maybe Neil's best song) is awesome as always, and following that with "Cortez The Killer", Cinnamon Girl", and "Like A Hurricane"...how could you not enjoy this album? Even asking for the crowds help to stop a rainstorm at the end of "The Loner" is priceless.

There is a concert film of this somewhere, directed byYoung under the name Bernard Shakey. Also of note...the guitar solo on "Cortez The Killer" was cut short because of time limitations for CD.

Your feedback for Live Rust