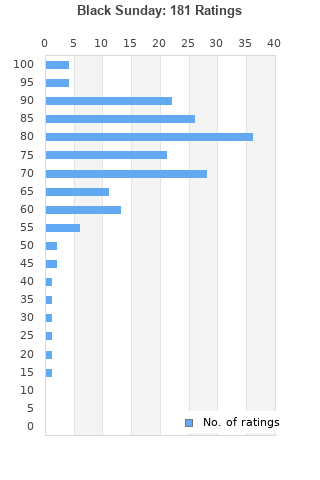 Black Sunday is ranked as the best album by Cypress Hill. 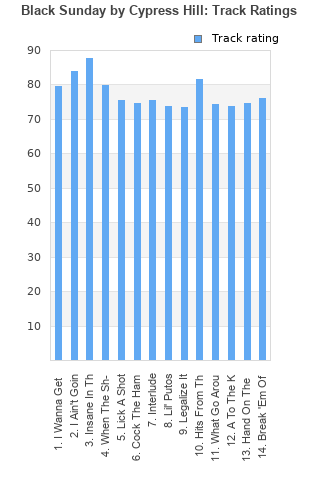 Insane In The Brain
Rating: 87 (49 votes)Comments:

Rating metrics: Outliers can be removed when calculating a mean average to dampen the effects of ratings outside the normal distribution. This figure is provided as the trimmed mean. A high standard deviation can be legitimate, but can sometimes indicate 'gaming' is occurring. Consider a simplified example* of an item receiving ratings of 100, 50, & 0. The mean average rating would be 50. However, ratings of 55, 50 & 45 could also result in the same average. The second average might be more trusted because there is more consensus around a particular rating (a lower deviation).
(*In practice, some albums can have several thousand ratings)
This album is rated in the top 7% of all albums on BestEverAlbums.com. This album has a Bayesian average rating of 76.2/100, a mean average of 75.1/100, and a trimmed mean (excluding outliers) of 76.4/100. The standard deviation for this album is 14.4.

I like these guys. Very original sound, blending genres. They tend to have a heavier rhythmic flow than any other rap or hip hop I've heard (Rock/Metal is my preferred genre). Lot of good songs on this. Fantastic album to groove to

Usual '90s hip hop with horror vocals that clearly inspired Danny Brown, but I completely understand why the '90s hip hop scene primarily went for Dr. Dre's production style and Snoop Dogg's delivery and both's disposition. The style is a bit too specific, and will probably only really appeal to a small crowd (as we see now again with Danny).

Great atmosphere, has some great tracks, a bit weaker near the end imo.

Great to just zone out to and so damn chill. Catchy too.

This album soundtracked my early weed-smoking days. Listening back to it now, it's surprisingly strong. If you fancy listening to guys rapping about getting high and killing people, this is one of the most enjoyable ways to do so. Also, Muggs is a beast of a producer. That man can sample and arrange drums with the best of them.

These guys are better when they're emotional. When they rap high, or about being high, it gets a little goofy. Go figure.

Your feedback for Black Sunday