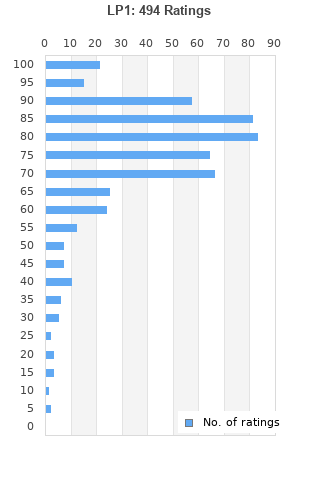 LP1 is ranked 2nd best out of 4 albums by FKA twigs on BestEverAlbums.com.

The best album by FKA twigs is Magdalene which is ranked number 673 in the list of all-time albums with a total rank score of 2,784. 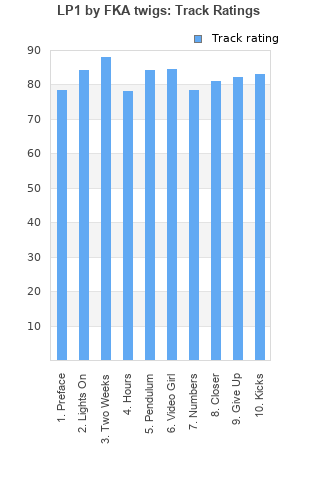 Rating metrics: Outliers can be removed when calculating a mean average to dampen the effects of ratings outside the normal distribution. This figure is provided as the trimmed mean. A high standard deviation can be legitimate, but can sometimes indicate 'gaming' is occurring. Consider a simplified example* of an item receiving ratings of 100, 50, & 0. The mean average rating would be 50. However, ratings of 55, 50 & 45 could also result in the same average. The second average might be more trusted because there is more consensus around a particular rating (a lower deviation).
(*In practice, some albums can have several thousand ratings)
This album is rated in the top 8% of all albums on BestEverAlbums.com. This album has a Bayesian average rating of 75.9/100, a mean average of 74.8/100, and a trimmed mean (excluding outliers) of 75.9/100. The standard deviation for this album is 16.8.

This album is horrible in my opinion, I truly can't stand it. One of the worst albums I have heard in my entire life.

Despite stumbling a few times, LP1 manages to be a great album. Some great production on this, I don't love her voice, but she is definitely a very good singer.

LP1 is an interesting album as the lush spacey production feels like a polished project of artist later in their career. The lyricism feels much more young, as many of the interesting ideas discussed lack the the punch twigs is reaching for. Still very enjoyable.

I sincerely hope her new release forces people to come back and revisit this fantastic album. It has the same average track rating as Magdalene but has only an album rating of 76 because it wasn't cool to like twigs when this came out - was she for real or did she just hit the market right with this certain sound? She's for real, she was on Magdalene but she showed it all here, oh and "Two Weeks" is got to get some serious consideration for top songs of the decade.

LP1 is more consistent if less adventurous than Magdalene. Her voice sounds like it descends from the heavens and the beats and production back it up w/ some sexy R&B futuristic instrumentals. She was singular on here though. You can point to points on Magdalene and say "that's Kate Bush" but here on LP1 it sounded like 100% FKA Twigs. I love both albums, and I'm glad we have both, for sure she could have dropped another experimental RnB album and it would have been great, but she didn't and I'm glad because she went even further in a different direction. But she sounds damn good w/ the sound she has on this LP1. Here's looking to 2024 for LP3!

So much anticipation rode this album before it came out but I think it's lived up to it. Where she could just as easily have gone for ten nice-but-naff radio-ready R&B ballads, she didn't. The rich mix of producers means that each track does its own thing, but they all belong to the same world.

Best track: Give Up. It's like the song you hear in your head just before the poltergeist pulls you into the TV.

Your feedback for LP1