Lost In The Dream (studio album) by The War On Drugs 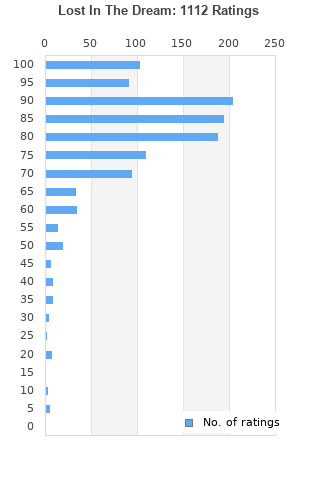 Lost In The Dream is ranked as the best album by The War On Drugs.

The War On Drugs - An Evening of LIVE DRUGS
Tabernacle, Atlanta, United States.

Tickets from Ticketmaster Get tickets
May
23
Mon
20:00

The War On Drugs - An Evening of LIVE DRUGS
Tabernacle, Atlanta, United States. 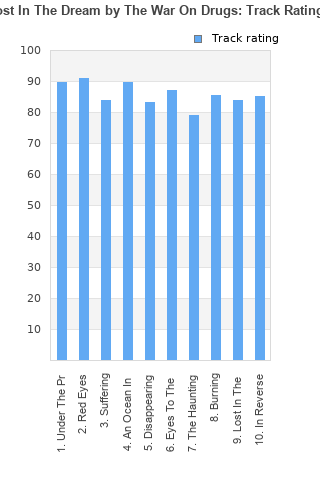 Under The Pressure
Rating: 90 (323 votes)Comments:

An Ocean In Between The Waves
Rating: 90 (281 votes)Comments:

Lost In The Dream rankings

Lost In The Dream collection

Lost In The Dream ratings

Rating metrics: Outliers can be removed when calculating a mean average to dampen the effects of ratings outside the normal distribution. This figure is provided as the trimmed mean. A high standard deviation can be legitimate, but can sometimes indicate 'gaming' is occurring. Consider a simplified example* of an item receiving ratings of 100, 50, & 0. The mean average rating would be 50. However, ratings of 55, 50 & 45 could also result in the same average. The second average might be more trusted because there is more consensus around a particular rating (a lower deviation).
(*In practice, some albums can have several thousand ratings)
This album is rated in the top 1% of all albums on BestEverAlbums.com. This album has a Bayesian average rating of 82.1/100, a mean average of 80.8/100, and a trimmed mean (excluding outliers) of 82.2/100. The standard deviation for this album is 14.8.

Lost In The Dream favourites

Lost In The Dream comments

An album that starts out very strong but slowly drifts away the further you delve into it. It starts very strongly with Under The Pressure and Red Eyes which are by far the best songs on the record. After that every song is pretty much the same in the fact that it has an engaging start but is dragged out so much that you lose all interest in the track. They carry songs on for far too long and that makes for a dull and long listen for us. This is probably why the run time seems so bloated as well. However, there is a lot I love about the record. One of them is the percussion performance which is a stand out for me and it makes every track it is on better. I do enjoy the lyrics and vocal as well and they also create a very consistent style of music that would be very effective if shortened down. Overall, the repetitive nature and length of this release hold it back but there is still a lot of quality and potential on display.

The Smiths of the New Century..?

I liked the first 3 tracks but I really couldn't get in to the rest of the album, just all sounded a bit samey to me.

A maddeningly frustrating album. Every song’s beginning draws me in (that’s hard to do!), but loses me by the end. Granduciel reminds me of that guy in college who figures an interesting guitar lick and then plays it repeatedly for 3 hours.

Obviously, there’s a comparison to Dylan, but it’s a poor man’s copy.

Amazing album! It has a great and unique sound, mixing classic rock with new ideas. The songs Red Eyes, Under The Pressure and An Ocean In Between The Waves are good enough to be classics.

Lost in the Dream was my front door to the War On Drugs. And I was completely overwhelmed by their music. This album is a floating beauty. I always like to listen to it entirely for it's like a one long musical adventure from the beginning to the end. Love it!

So so so much more than what Rolling Stone calls "archetypal road-trip music," though I have to admit I listen to it almost every time I go on a long ride. Every beat and chord twist and wind around one another impeccably to form the grandest of auditory spectacles. Granduciel's vocals are filled with passion and momentum on every track whether slow or fast. The vibe of this record is at once youthful and wise and, because of that, it really does justice to its title. You could be sitting in a small, bare room listening to it on vinyl but it feels like you are immersed in a dreamlike landscape that is earthy and fantastical, and it never takes you too far in either direction. This record is the ultimate fruit of Americana.

Your feedback for Lost In The Dream