This Is All Yours (studio album) by alt-J 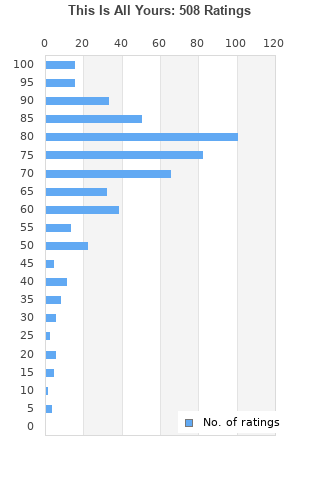 Alt-J This Is All Yours Vinyl - Limited Edition Colored Vinyl
Condition: Used
$100.00

alt-J This Is All Yours Audio CD (ex-Library) 1 disc
Condition: Acceptable
$6.49

This Is All Yours is ranked 2nd best out of 7 albums by alt-J on BestEverAlbums.com.

The best album by alt-J is An Awesome Wave which is ranked number 224 in the list of all-time albums with a total rank score of 8,136. 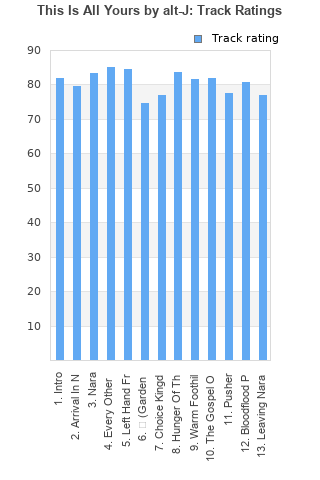 Every Other Freckle
Rating: 85 (119 votes)Comments:

This Is All Yours rankings

This Is All Yours collection

This Is All Yours ratings

Rating metrics: Outliers can be removed when calculating a mean average to dampen the effects of ratings outside the normal distribution. This figure is provided as the trimmed mean. A high standard deviation can be legitimate, but can sometimes indicate 'gaming' is occurring. Consider a simplified example* of an item receiving ratings of 100, 50, & 0. The mean average rating would be 50. However, ratings of 55, 50 & 45 could also result in the same average. The second average might be more trusted because there is more consensus around a particular rating (a lower deviation).
(*In practice, some albums can have several thousand ratings)
This album has a Bayesian average rating of 73.0/100, a mean average of 71.5/100, and a trimmed mean (excluding outliers) of 73.0/100. The standard deviation for this album is 17.1.

This Is All Yours favourites

This Is All Yours comments

Warm Foothills is the high point of the album. Every Other Freckle, Left Hand Free and Gospel of John Hurt are also good but there isn't much to shout about with the rest of the album. A solid follow-up to An Awesome Wave, but nowhere near the same level. Not a fan of Hunger of the Pine.

Whatever it is that didn't get me that into alt-J after the first album is gone now, because this album is stonking. Some strong lyrics too.

This album is so much clearer and quieter, than the others. Just lie in the sun and let the melodies float through your head.

Alt-J has the distinction of releasing three albums in the 2010s, all of which are among my favorite albums of the decade. This Is All Yours is probably the warmest and bassiest of the three albums, the one where their electronic effects have the greatest cumulative emotional impact--though on the whole, I still love An Awesome Wave just a little bit more. It's a kind of concept album, I suppose, though the exact subject matter is a little obscure to me. I'm not exactly sure what to make of the songs with "Nara" in the title, except to say it's an ancient city in Japan known for its beautiful primeval forests. Maybe that's enough. One reviewer called alt-J the "Wes Anderson of song lyrics," which might be giving them too much credit, though I will say they manage something magical through impressionism rather than literal meaning.

Definitely a good album. Though not as good as An Awesome Wave I still think that people forget about this album too much because it is overshadowed by its predecessor. I just like the way you get sucked in the album for a journey from the beginning too the end without any really outstanding songs.

Not a bad album, I really loved the first half. From Choice Kingdom and on, the tracks are okay, but it feels like you're listening to the same thing over and over.

Not quite as good as AW but then again I believe that is one of the very best albums of all time. Lots to love here, still.

It think An Awsome Wave has a slight advantage in the sense that it is more consistant than this. There are a couple I would probably cut, like Bloodflow pt 2. That being said I think this does have some of alt j's best songs on.

I like the route they went on this record, taking it in more of a mystical middle-eastern-y direction. Its like if 'Taro' (from their previous release) was stretched out over the whole album, until a thin, delicious glaze covered the whole thing. Some points get a little boring, and some tracks feel overlong, but overall, better-than-decent sophomore release.

Your feedback for This Is All Yours