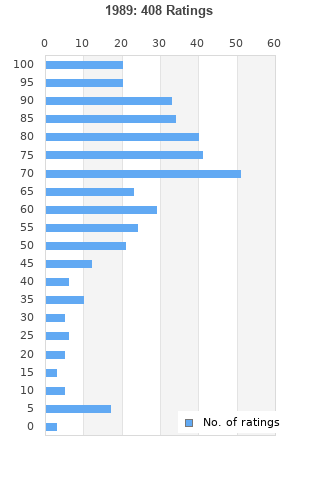 1989 is ranked as the best album by Taylor Swift. 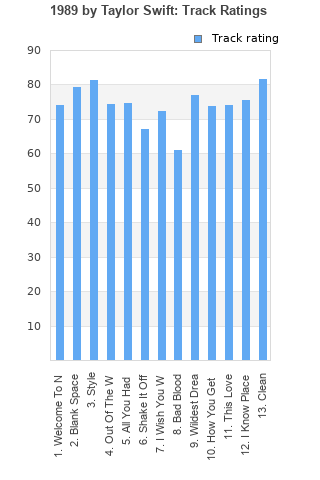 Rating metrics: Outliers can be removed when calculating a mean average to dampen the effects of ratings outside the normal distribution. This figure is provided as the trimmed mean. A high standard deviation can be legitimate, but can sometimes indicate 'gaming' is occurring. Consider a simplified example* of an item receiving ratings of 100, 50, & 0. The mean average rating would be 50. However, ratings of 55, 50 & 45 could also result in the same average. The second average might be more trusted because there is more consensus around a particular rating (a lower deviation).
(*In practice, some albums can have several thousand ratings)
This album has a Bayesian average rating of 65.5/100, a mean average of 65.3/100, and a trimmed mean (excluding outliers) of 65.3/100. The standard deviation for this album is 24.6.

I actually secretly liked the singles - lol. I don't mind a bit of pop - sometimes I need something light and not challenging or deep. But it still has to be good - and this album is. I really enjoy Blank Space, Out Of The Woods, Shake It Off, Wildest Dreams and Clean. Weakest track for me - I Wish You Would

Style, Wildest Dreams, and Clean are all really masterfully written pop songs. A great album overall and one that is underrated by the cool kids.

Blank Space is easily my favorite song off the album, but there's a lot to enjoy here. I used to hate Shake It Off, but now that it's been over 6 years since it was a hit I really vibe with it. Not consistent enough to add to my regular rotation, but there are some absolute bops scattered about.

Loaded with hits and some of the best songs weren't even singles.

Out of the woods and welcome to new york are really not good to my ears, but over the years Blank Space has stuck with me for some reason and I just recently listened to the rest of the album and they're not as bad as a the singles (bad blood and shake it off aren't awful but I would prefer never to hear them again) The clear winner here for best song though is Clean, very very good track

I think 1989's greatest weakness is that it's choruses are not very good. "Out of the woods" and "Welcome to New York" are just clunky to the ear. "Blank space" sounds like a self righteous Facebook post got made into a song. I will give credit where credit is due "Style" is a great song and the B side is much stronger than the A.

You guys are just mean