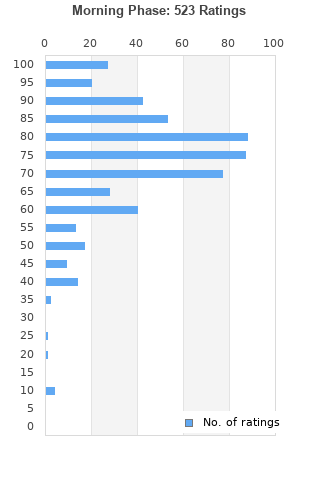 Morning Phase is ranked 3rd best out of 19 albums by Beck on BestEverAlbums.com.

The best album by Beck is Odelay which is ranked number 252 in the list of all-time albums with a total rank score of 7,336. 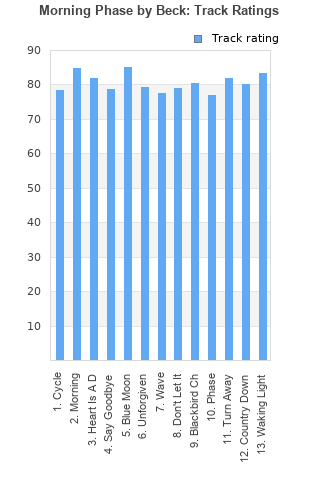 Rating metrics: Outliers can be removed when calculating a mean average to dampen the effects of ratings outside the normal distribution. This figure is provided as the trimmed mean. A high standard deviation can be legitimate, but can sometimes indicate 'gaming' is occurring. Consider a simplified example* of an item receiving ratings of 100, 50, & 0. The mean average rating would be 50. However, ratings of 55, 50 & 45 could also result in the same average. The second average might be more trusted because there is more consensus around a particular rating (a lower deviation).
(*In practice, some albums can have several thousand ratings)
This album is rated in the top 16% of all albums on BestEverAlbums.com. This album has a Bayesian average rating of 74.8/100, a mean average of 74.1/100, and a trimmed mean (excluding outliers) of 74.8/100. The standard deviation for this album is 15.3.

One of the rare times The Grammys got it right

The last I had heard from Beck before 2014 was the project he released as a songbook for others to perform, and I was thinking the next logical step for him would be an album of "suggestions", with him describing ideas he had for future tracks. And then he actually went and recorded an album, and so I shut up and listened. It's up there with his better work, but without the threat of being overplayed on adverts.

Best track: Unforgiven. The whole album is like him taking a break from the upbeat tracks he's more famous for, but this track in particular gives out great chill-out vibes.

Until Morning Phase was released, I'd always been able to compartmentalize Beck's involvement in Scientology from his music. Although this album shares a lot of sonic characteristics with Sea Change, which might be both Beck's best album and his mellowest, it begins to show the signs of adult-contemporary mediocrity that I've always associated with celebrities who turn to Scientology. (I realize Beck was raised in that tradition, but I'd never previously seen signs of it in his music.) Perhaps, though, I'm wrongly attributing the boring aspects of this album to Beck's religion when the real reasons are age, celebrity, and/or artistic lack of inspiration. Either way, this is far from terrible--just merely competent.

As a fan of both artists, I really do hope you find a place in your heart for Beck. It's nearly impossible to compare any live act to U2. My favorite albums are Sea Change (it's a breakup album... real downer, but love it), and then Guero. Midnight Vultures is pretty solid for a party down in funk town, if your into that kind of thing.

I have never ever liked Beck, even though I have desperately tried through the decades since I was a teen. I even saw them live recently: they opened the Kaufmann Football Stadium in Kansas City for U2 on the Joshua Tree Tour.

I found his/their live stage performance to be extremely underwhelming both emotively through their body language and facial expressions (pretty easy to see when their close-ups are on gigantic screens), and their live music was much to my dismay the same: terribly underwhelming.

I just found this website TONIGHT and I'm thrilled about it and all of the great, insightful, and thoughtful members of this site. So, I'm going to listen to what many of you are saying that this is a quite different Beck, a new experience for him as an artist and human being as well as one for the fan and listener.

I'm looking forward to listening to this album next up on Spotify.

This is Beck's best album.

Severely underrated on this site imo. One of my favorite Beck albums.

The first track, I could have sworn I had before on the Sea Change album. There are some very good moments and sure he had some back problems, but this generally sounds too much like Sea Change. Thank goodness, he brought out Colors.

Your feedback for Morning Phase