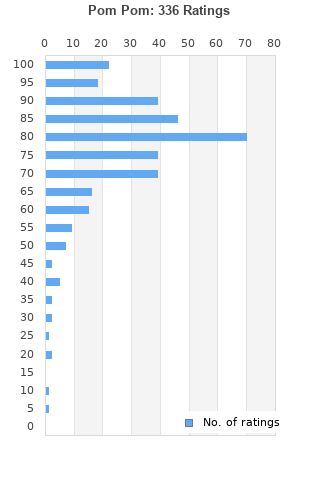 Pom Pom is ranked as the best album by Ariel Pink. 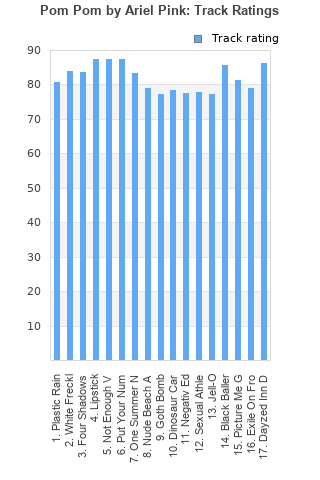 Put Your Number In My Phone
Rating: 88 (85 votes)Comments:

Rating metrics: Outliers can be removed when calculating a mean average to dampen the effects of ratings outside the normal distribution. This figure is provided as the trimmed mean. A high standard deviation can be legitimate, but can sometimes indicate 'gaming' is occurring. Consider a simplified example* of an item receiving ratings of 100, 50, & 0. The mean average rating would be 50. However, ratings of 55, 50 & 45 could also result in the same average. The second average might be more trusted because there is more consensus around a particular rating (a lower deviation).
(*In practice, some albums can have several thousand ratings)
This album is rated in the top 3% of all albums on BestEverAlbums.com. This album has a Bayesian average rating of 78.2/100, a mean average of 77.1/100, and a trimmed mean (excluding outliers) of 78.3/100. The standard deviation for this album is 15.7.

Solid record. Grew on me

This album always struggles to maintain my interest for the full 67 minute run time which is far too long for this record. However, it does have a few songs which are very enjoyable and the weirdness of the music works brilliantly on these songs. The tempo and energy that is maintained is a high point as well as there is always something crazy going on. This absurdity is why the album is loved so much and I can see why as it is so unique and interesting to listen to but it never really clicked with me. Some of the songs make me cringe due to the weird lyrics or music and there is so much I think that could be cut from this album. If it was closer to 30 minutes it would be stronger and feel more complete rather than bloated. Overall, this is an album that never really clicked for me but I very much enjoy some of the singles on here.

"Pom Pom" is an oddball hodgepodge of styles. Over the course of the album songs will change instrumentals and genres at a whim. Interlaced through are some spectacular songs. My personal favorite track is "Lipstick", a synth goth track told through the eyes of a murderer. The downside to these changes are a lot of the songs feel like novelties.

What if Frank Zappa, the Beatles and the Stooges decided to make an album in the 2010's?

Lots of fun songwriting and energy to be enjoyed on Pom Pom. A vast array of subgenres are represented here, each carefully place within the context of the album.

Great album, each songs are different and have catchy hook.

I'd be hard-pressed to say this isn't a top 10 album of the decade. Completely absurd yet incredibly accessible and intoxicating. This album is unlike anything I've ever heard before and although it is long, almost all of the songs are highly entertaining.

Pom Pom is absolutely one of 2014's strangest albums. I remain a little on the fence as to whether or not it's one of the year's best. In its favor I'll say it succeeds utterly in busting down any notion of musical genre, residing somewhere in the ambiguous terrain carved out by the likes of Frank Zappa in the 1970s. At its best Pom Pom is campy, funny, bizarre, and oddly mesmerizing. Then again, it's also obnoxious at times, with a kind of smirking irony that I find generally distasteful. The fact that you're seeing it appear in my 2014 chart is indication that I've tentatively come down on the side of finding it more a valuable contribution than a detraction, but I'll also confess that five years later I'm still chewing on it but not quite able to digest it. A polarizing album that still leaves me unsure which pole I'm drawn to.

I can't think of another album that feels so throwaway and yet so masterful. The record on which Pink flamboyantly flaunts the daft hand with which he can manipulate any style to his whim, crafting gorgeously infectious hooks with liberal abandon. Even the arguable run of filler from Goth Bomb through to Jello is a masterclass in songcraft. An affectionate pastiche of so many overlooked sects of pop music history, packed to the brim with genius melodies and arrangements.

Fucking fantastic. This record is equal-parts frightening, beautiful, catchy, and ridiculous. It packs in more crazy turns-of-style than I've perhaps ever heard from a record and yet pulls it all off.

Your feedback for Pom Pom