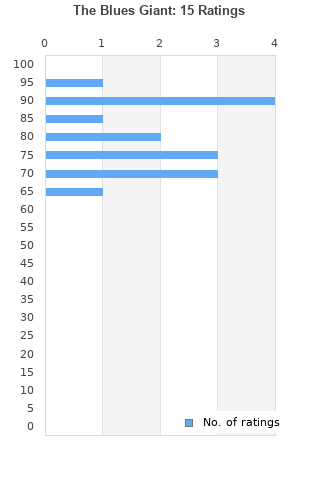 The Blues Giant is ranked 3rd best out of 25 albums by Buddy Guy on BestEverAlbums.com.

The best album by Buddy Guy is Sweet Tea which is ranked number 4268 in the list of all-time albums with a total rank score of 326. 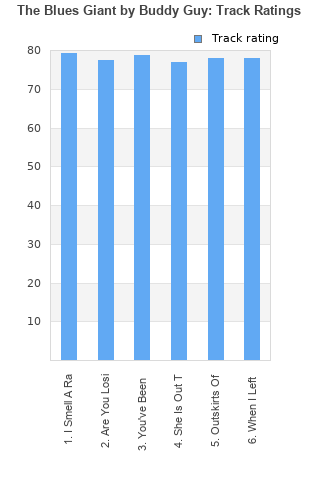 Rating metrics: Outliers can be removed when calculating a mean average to dampen the effects of ratings outside the normal distribution. This figure is provided as the trimmed mean. A high standard deviation can be legitimate, but can sometimes indicate 'gaming' is occurring. Consider a simplified example* of an item receiving ratings of 100, 50, & 0. The mean average rating would be 50. However, ratings of 55, 50 & 45 could also result in the same average. The second average might be more trusted because there is more consensus around a particular rating (a lower deviation).
(*In practice, some albums can have several thousand ratings)
This album is rated in the top 4% of all albums on BestEverAlbums.com. This album has a Bayesian average rating of 77.1/100, a mean average of 80.0/100, and a trimmed mean (excluding outliers) of 80.0/100. The standard deviation for this album is 9.4.

"Stone Crazy" defines strong electric blues and the excitement exhumed from it. Though this excellent Buddy Guy live album was first released in 1979 as "The Blues Giant" on a small French label, it was prominently re-released as "Stone Crazy!" on Alligator Records in '81, it's more recognizable title. Matt "Guitar" Murphy provides incredible rhythm and second guitar to the set. It's raw yet beautiful!

Great electric blues songs with an extra fiery delivery from Buddy. A scorching blues album that never relents in its intensity.

The most emotionally intense album I can think of. The aggregate effect of Guy's fervent singing and blistering guitar are at times almost overwhelming. Not for blues purists -- Guy influenced Jimi Hendrix and in turn Hendrix had some influence on him. Originally released as "Blues Giant" for a tiny label in France in 1979, the guitar playing is a little out-of-control, but the music's raw feeling is undeniable.

Your feedback for The Blues Giant