For The Roses (studio album) by Joni Mitchell 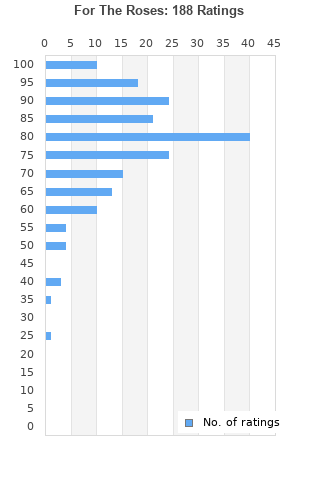 Joni Mitchell “For The Roses”
Condition: Used
Time left: 6h 54m 9s
Ships to: Worldwide
$15.00
Go to store
Product prices and availability are accurate as of the date indicated and are subject to change. Any price and availability information displayed on the linked website at the time of purchase will apply to the purchase of this product.  See full search results on eBay

For The Roses is ranked 7th best out of 29 albums by Joni Mitchell on BestEverAlbums.com.

The best album by Joni Mitchell is Blue which is ranked number 83 in the list of all-time albums with a total rank score of 18,887. 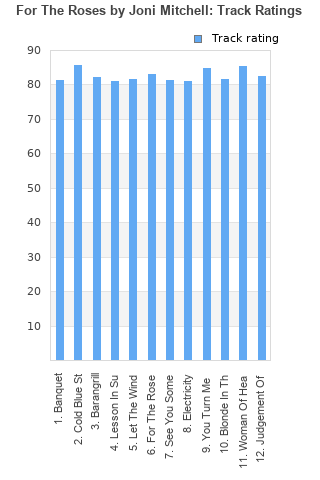 For The Roses rankings

For The Roses collection

For The Roses ratings

Rating metrics: Outliers can be removed when calculating a mean average to dampen the effects of ratings outside the normal distribution. This figure is provided as the trimmed mean. A high standard deviation can be legitimate, but can sometimes indicate 'gaming' is occurring. Consider a simplified example* of an item receiving ratings of 100, 50, & 0. The mean average rating would be 50. However, ratings of 55, 50 & 45 could also result in the same average. The second average might be more trusted because there is more consensus around a particular rating (a lower deviation).
(*In practice, some albums can have several thousand ratings)
This album is rated in the top 3% of all albums on BestEverAlbums.com. This album has a Bayesian average rating of 78.3/100, a mean average of 78.0/100, and a trimmed mean (excluding outliers) of 78.7/100. The standard deviation for this album is 14.2.

For The Roses favourites

For The Roses comments

A mistaken album. One of Joni best!

A very consistent Joni album in that all the tracks are strong and none is better than the other an album that should be listened to as a whole. A big step up from Blue in the jazzy feel of the album she really comes of age on this album and over the next few years follows it up with Court & Spark, Hissing Of Summer Lawns & Hejira 3 of her best ever albums.

Joni's only album to be added to the National Recording Registry.

Cold Blue Steel and Sweet Fire is a harrowing warning against drug abuse because it's as seductive as it's subject. This album is a step ahead of Blue which, to be honest is too navel gazey for me. Joni really stretches her wings with FTR and her guitar tunings are sublime.

This album tends to get slightly forgotten as it's sandwiched in between two out and out classics in, blue, and, court and spark, but, for the roses, is an excellent LP in it's own right. A combination of the acoustic folk sounds of, blue, and the more jazzier sounds Joni would employ on, court, FTR, features great tracks, especially in, cold blue steel and sweet fire, electricity, and, barandgrill, it's another in those brilliant run of seventies albums from Joni. Just as essential as her other records.

My opinion of this album has indeed drastically improved over time. Thanks, ethweg123!

Best songs: Barangrill, Lesson in Survival, For the Roses, Woman of Heart and Mind

I'm with ethweg123 - this is a sadly underrated album that has grown on me over the years, whereas COURT AND SPARK, which I used to prefer, has slightly waned in my affections (though it's still good). I think the lyrics are straightforward yet profound.

Really can't believe how underrated this album is. "Blue" was my intro to Joni, I just melted. But I grew out of it, it was just too sad. I wanted redemption. This is what Mitchell gives us in "For The Roses". It's a masterpiece depicting the light at the end of the tunnel. Banquet is phenomenal, "Some get the gravy
And some get the gristle
Some get the marrow bone
And some get nothing
Though there's plenty to spare".
A line that sums up humanity like no other I can think of.

Joni was always pressured to create "hits", when deep inside she had more pure emotions to emit through her work. This album showcases it like no other in her collection.

Her piano work here is beyond amazing, probably amongst the best pianist work of the 20th Century. It is so depressing how over looked this fact is alone, in addition to her more commercial albums overshadowing it. This is as real as you can get folks, an album like no other. I used to listen to her entire collection with love, but now because "For The Roses" set my standards so high, I can no longer.

"Lesson In Survival/Let The Wind Carry Me" is just pure ecstasy. So raw, beautiful, deep, and real. "Ludwig's Tune", hence the name is a homage to Beethoven like no other.
"Condemned to wires and hammers
Strike every chord that you feel
That broken trees
And elephant ivories conceal"

By passing up this album, you are dismissing music at it's very best. You must give this album a try, even if it is not on par to your standards at first listen. That is the true sign of advanced music, it must soak in.

You will not regret the investment in multiple listenings, this is a life changer.

It's okay, but one of the weakest of Mitchell's 60s/70s catalogue. Indecisive, but still some moments of beauty.

I agree with juno; "Blue" and "Court and Spark" are much better.

Your feedback for For The Roses