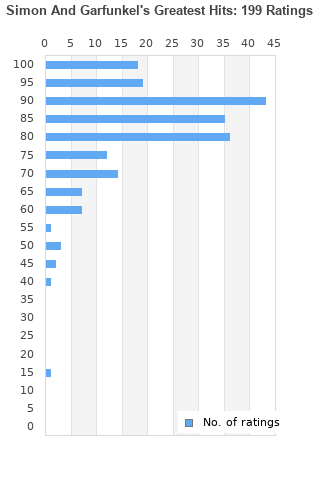 Simon and Garfunkel's Greatest Hits by Simon & Garfunkel (CD, Sep-2010, Sony...
Condition: Very Good
Time left: 8h 20m 39s
Ships to: Worldwide
$0.99
Go to store
Product prices and availability are accurate as of the date indicated and are subject to change. Any price and availability information displayed on the linked website at the time of purchase will apply to the purchase of this product.  See full search results on eBay

Simon And Garfunkel's Greatest Hits is ranked 6th best out of 20 albums by Simon & Garfunkel on BestEverAlbums.com.

The best album by Simon & Garfunkel is Bridge Over Troubled Water which is ranked number 115 in the list of all-time albums with a total rank score of 14,970.

Listen to Simon And Garfunkel's Greatest Hits on YouTube 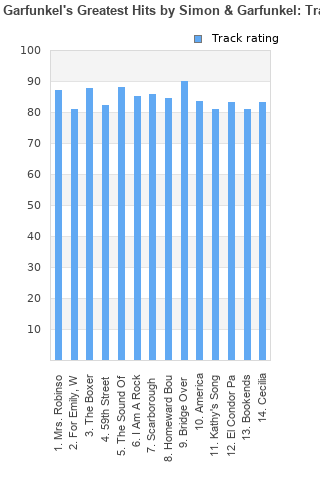 The Sound Of Silence
Rating: 88 (62 votes)Comments:

Rating metrics: Outliers can be removed when calculating a mean average to dampen the effects of ratings outside the normal distribution. This figure is provided as the trimmed mean. A high standard deviation can be legitimate, but can sometimes indicate 'gaming' is occurring. Consider a simplified example* of an item receiving ratings of 100, 50, & 0. The mean average rating would be 50. However, ratings of 55, 50 & 45 could also result in the same average. The second average might be more trusted because there is more consensus around a particular rating (a lower deviation).
(*In practice, some albums can have several thousand ratings)
This album is rated in the top 1% of all albums on BestEverAlbums.com. This album has a Bayesian average rating of 82.9/100, a mean average of 82.8/100, and a trimmed mean (excluding outliers) of 83.5/100. The standard deviation for this album is 13.5.

My third grade (I was 7-8 years old) teacher played her guitar once a week for the class and made "59th Street Bridge Song(Feelin' Groovy)" our class's anthem. I think this is where my love for pop music began.

There are some great tracks on this one! I'd rate it even higher if they had included "The Only Living Boy In New York". It's my second favorite song by them after "Bridge Over Troubled Water".

The ultimate act for perfect harmonious vocals and stunning songs

It seems kooky to include a greatest hits in your top records. But this is the 1st record I recall hearing. I was 3. I put my ear right close the speakers. I remember the woofers pounding. The depth of sound was overwhelming. It opened me up to a life long love of music.

The songs on this album truly represent the best of Simon and Garfunkel.

I'm not used to really like greatest hits, but this is really a great one.

Your feedback for Simon And Garfunkel's Greatest Hits