At War With The Mystics (studio album) by The Flaming Lips 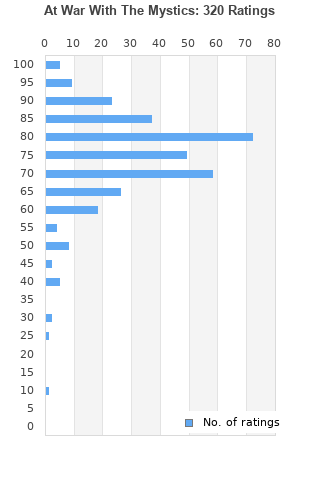 At War With The Mystics is ranked 5th best out of 46 albums by The Flaming Lips on BestEverAlbums.com.

The best album by The Flaming Lips is The Soft Bulletin which is ranked number 108 in the list of all-time albums with a total rank score of 14,331.

Listen to At War With The Mystics on YouTube 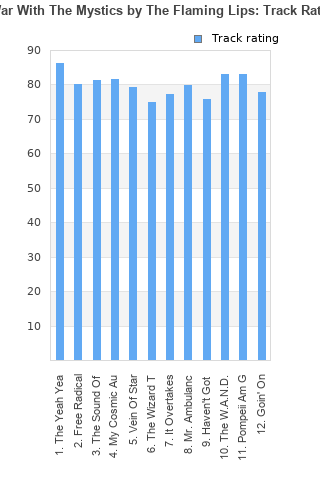 The Yeah Yeah Yeah Song (With All Your Power)
Rating: 86 (82 votes)Comments:

1
2.
Free Radicals (A Hallucination Of The Christmas Skeleton Pleading With A Suicide Bomber)
Rating: 80 (49 votes)Comments:

1
4.
My Cosmic Autumn Rebellion (The Inner Life As Blazing Shield Of Defiance And Optimism As Celestial Spear Of Action)
Rating: 81 (45 votes)Comments:

0
6.
The Wizard Turns On... The Giant Silver Flashlight And Puts On His Werewolf Moccasins
Rating: 75 (41 votes)Comments:

At War With The Mystics rankings

At War With The Mystics collection

At War With The Mystics ratings

Rating metrics: Outliers can be removed when calculating a mean average to dampen the effects of ratings outside the normal distribution. This figure is provided as the trimmed mean. A high standard deviation can be legitimate, but can sometimes indicate 'gaming' is occurring. Consider a simplified example* of an item receiving ratings of 100, 50, & 0. The mean average rating would be 50. However, ratings of 55, 50 & 45 could also result in the same average. The second average might be more trusted because there is more consensus around a particular rating (a lower deviation).
(*In practice, some albums can have several thousand ratings)
This album is rated in the top 13% of all albums on BestEverAlbums.com. This album has a Bayesian average rating of 75.1/100, a mean average of 74.5/100, and a trimmed mean (excluding outliers) of 75.2/100. The standard deviation for this album is 12.7.

At War With The Mystics favourites

At War With The Mystics comments

I find this album more interesting, entertaining, and exciting than Yoshimi (which I also like).

The Flaming Lips is one of my favorite bands of the 2000s. On this album, the Flaming Lips want to re-enchant the world, but without emptying it of its darkness, without refusing the confrontation with the morbid one. Myth, magic and fantasy are the essence of Flaming Lips. But being sidetracked by a moronic fundamentalism, their obsessions have become elsewhere a weapon, responsible for massacres. "At War with the Mystics" is a virulent charge against this misguided mysticism. This album is probably the most Underrated of the band and remains one of the best of their discography in my opinion.

Best track: "The Yeah Yeah Yeah Song (With All Your Power)"

After the excellent three-peat "Zaireeka", "Soft Bulletin" & "Yoshimi" , the bar has unfortunately been set incredibly high for "Mystics" and although it is a solid record, it can't help but pale in comparison. There are some really good ideas here, but it doesn't really coalesce into a unified vision like the three previous records from the Lips that I namedropped. Still, definitely worth checking out for some good pop tunes.

Impressive yet underwhelming album from The Flaming Lips. "At War With The Mystics" (brilliant title by the way, along with the track names) sonically continues down the eccentric psychedelic pop path that "Yoshimi" trailblazed, however this one just doesn't hold up in comparison to that 2002 masterpiece. This feels messy and unfortunately the sometimes juvenile and mean-spirited lyrics make no attempt to remedy the record's structural imbalance. They've done better, but it's still worth listening to for an offbeat journey.

One of my favs from the lips.

I must admit this is my least favourite Flaming Lips album, at least of the millennium. It starts of well but then it fizzles out a bit. Probably, it's a bit overlong. Take out a few of the weaker tracks and you have a tight little album. Having said that, it is the Flaming Lips, so it's never going to be bad, but there has to be one album by any band you love that you consider the weakest. This is it for me for the Flaming Lips.

Fantastic album, criminally underrated - how this isn't even in the top 1000 confounds me. This album perhaps sees the Lips at their most versatile, the album with the most dynamic range - rocking hard on one song to creating astounding beautiful music on the next and not a weak track here (well, maybe Haven't Got a Clue, but c'mon even that's great) and considering there's near-on an hour of brilliance here that's no mean feat. Best album of 2006, top 5 of the 2000s and The Flaming Lips' second best only to the outstanding Soft Bulletin.

Your feedback for At War With The Mystics