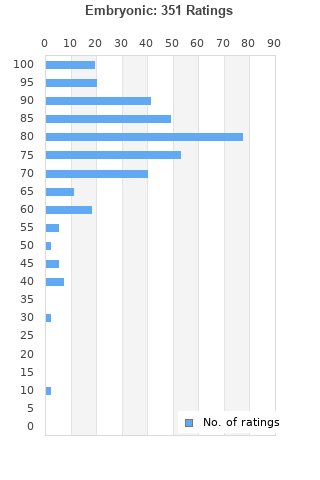 Embryonic is ranked 4th best out of 46 albums by The Flaming Lips on BestEverAlbums.com.

The best album by The Flaming Lips is The Soft Bulletin which is ranked number 113 in the list of all-time albums with a total rank score of 13,972.

An Evening with The Flaming Lips
South Side Ballroom, Dallas, United States. 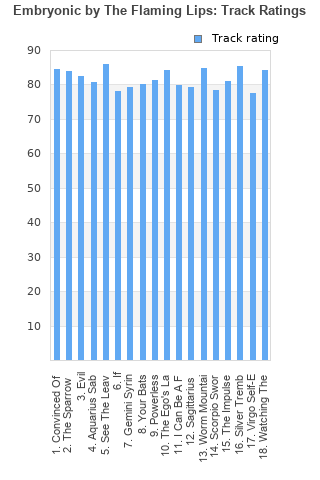 Rating metrics: Outliers can be removed when calculating a mean average to dampen the effects of ratings outside the normal distribution. This figure is provided as the trimmed mean. A high standard deviation can be legitimate, but can sometimes indicate 'gaming' is occurring. Consider a simplified example* of an item receiving ratings of 100, 50, & 0. The mean average rating would be 50. However, ratings of 55, 50 & 45 could also result in the same average. The second average might be more trusted because there is more consensus around a particular rating (a lower deviation).
(*In practice, some albums can have several thousand ratings)
This album is rated in the top 3% of all albums on BestEverAlbums.com. This album has a Bayesian average rating of 78.5/100, a mean average of 78.0/100, and a trimmed mean (excluding outliers) of 78.7/100. The standard deviation for this album is 14.0.

The Flaming Lips wander around musically for 70 minutes.

Great album. It took a while to grow on me but I think it's a top 3 Lips album along with Soft Bulletin and Clouds taste metallic. Favorite songs are Watching the planets and the sparrow looks up at the machine

It's long, but it makes the most of nearly every second of every track. Excellent album.

Love I Can Be a Frog and I usually love experimental albums but honestly this one is kinda a mess. One of my least favorite Lips albums. Great album cover so I had high expectations. They made up for it with the wonderfully raw and dark The Terror, now that one really grew on me!

An extremely dense and head-spinning record with necessary calming moments. Can be very difficult to get into, but once you're in, "Embryonic" reveals itself as a deliciously dark treat unspooling itself very messily. A step-up from "Mystics" and quite an exciting shift into experimental rock territory not visited since 97's "Zaireeka".

A long 70 minutes stuffed with chaos and darkness... the overrall effect is suffocating in the best possible way. Murky melodies and quirky flourishes abound in typical Flaming Lips fashion, but it's probably not a record that I would come back to a lot because "Embryonic" just isn't a record to physically enjoy, although the production is undeniably impressive. Very much a successor to their last record "At War With the Mystics" in that they both sound great but have something noticeably missing that keeps them from entering the top tier of Flaming Lips records. Perhaps there's just no feeling of awe post-Yoshimi.

Frickin wacky album. I just get this sense listening to it that even though its made on very similar instruments to many other albums, there has really never been anything similar to it that I have ever heard. Just the way the songs are constructed is so odd. I hear maybe traces of krautrock, and a bit of similarity to the more normal synthy stuff they have done on The Terror, but that's kindof the only tangible link to other music that it seems to have. Sometimes it works really well, others not so much. Hopefully I will be able to understand it more as I listen. The standout is probably Ego's Last Stand, though the bonus track UFOs Over Baghdad is pretty cool too, though more in their usual vein.

I love the sparse, ambient, psych, kraut and harsh instrumentals permeated throughout, especially when paired with Wayne's beautiful crooning & the enigmatic but random sampling. 2009 was truly the year for neo-psychedelia and this is one of the best documents from that time.

A noisy and psychedelic album, embryonic, is Flaming Lips most challenging record to date. Obviously needs to be listened in one go, it features some great moments; convinced of the hex, is a great opener, watching the planets, is a great closing track and in between there are some wonderful cuts, especially in, I can be a frog, featuring Karen O from Yeah,yeah,yeahs. Great stuff.

A little slow at the beginning but once you hit If the album really takes off. Lots of great tracks on this one. The chaos and out of control psychedelic style definitely makes this one of the Lip's bests works.

Your feedback for Embryonic