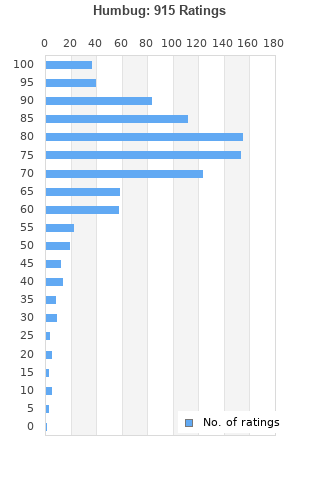 Humbug is ranked 4th best out of 9 albums by Arctic Monkeys on BestEverAlbums.com.

The best album by Arctic Monkeys is Whatever People Say I Am, That's What I'm Not which is ranked number 55 in the list of all-time albums with a total rank score of 22,028. 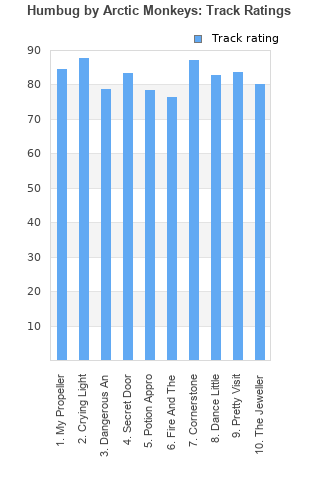 Rating metrics: Outliers can be removed when calculating a mean average to dampen the effects of ratings outside the normal distribution. This figure is provided as the trimmed mean. A high standard deviation can be legitimate, but can sometimes indicate 'gaming' is occurring. Consider a simplified example* of an item receiving ratings of 100, 50, & 0. The mean average rating would be 50. However, ratings of 55, 50 & 45 could also result in the same average. The second average might be more trusted because there is more consensus around a particular rating (a lower deviation).
(*In practice, some albums can have several thousand ratings)
This album is rated in the top 11% of all albums on BestEverAlbums.com. This album has a Bayesian average rating of 75.5/100, a mean average of 74.3/100, and a trimmed mean (excluding outliers) of 75.5/100. The standard deviation for this album is 16.2.

A slight change in tone from their first two albums - less cheeky and more dark. Underrated though. Some great stuff on here - Crying Lightning, Cornerstone and My Propeller are my highlights.

The brightest gem of all Arctic Monkeys discography

Hypnotic, slow, sexy.
I really do enjoy the influence that Josh Homme and Queens of the Stone Age bring to this project.

Their "best of the rest" (meaning everything except their debut).

Not a bad album, but definitely not too interesting a listen. Definitely a desert rock/stoner rock album, but I get the sense that this is a bit of a precursor to AM in that Turner's lyrics kind of just drone on and linger too long. The album gets boring in The Fire and The Thud and in Dance Little Liar. Feels like a lot of these songs would be featured in the background of movie scenes in which the character are in a drugged stupor.

My favourite album by them. Love the change in style and more psychedelic style, very spacey. Love it from front to back. Cornerstone is the centre piece of this album for me, perfectly sums up losing a partner and seeing their face everywhere you go. Secret door, cry lighting are fantastic tracks also.

This album has some strong tracks, but I don’t think it’s the best Arctic Monkeys can do. Interesting and kinda darker than his two predecessors.

Very interesting album that gets you into a trance after a few listens. One of my personal favourites

My Propeller sets the tone with a mysterious, somewhat lazy delivery that is carried throughout the whole album, maybe with the lighter tone of Cornerstone as the exception.

Crying Lightning and Cornerstone are two great songs, but to me the highlights are Secret Door and Dance Little Liar (and maybe The Jeweller's Hands).

This is my favorite AM album.

What the hell is this doing in the top 500

Your feedback for Humbug