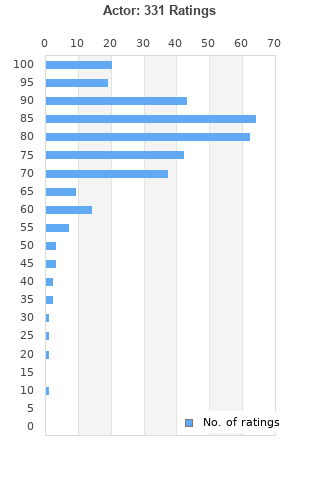 Actor is ranked 4th best out of 8 albums by St. Vincent on BestEverAlbums.com.

The best album by St. Vincent is St. Vincent which is ranked number 454 in the list of all-time albums with a total rank score of 4,187. 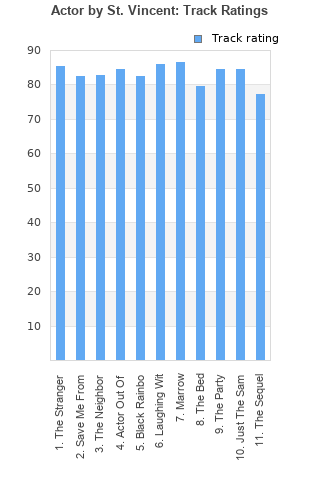 Laughing With A Mouth Of Blood
Rating: 86 (72 votes)Comments:

Rating metrics: Outliers can be removed when calculating a mean average to dampen the effects of ratings outside the normal distribution. This figure is provided as the trimmed mean. A high standard deviation can be legitimate, but can sometimes indicate 'gaming' is occurring. Consider a simplified example* of an item receiving ratings of 100, 50, & 0. The mean average rating would be 50. However, ratings of 55, 50 & 45 could also result in the same average. The second average might be more trusted because there is more consensus around a particular rating (a lower deviation).
(*In practice, some albums can have several thousand ratings)
This album is rated in the top 2% of all albums on BestEverAlbums.com. This album has a Bayesian average rating of 80.1/100, a mean average of 79.3/100, and a trimmed mean (excluding outliers) of 80.3/100. The standard deviation for this album is 13.4.

A strong and defying record that misses something that would make it brilliant.
I understand this one as a finding-your-way-album with some good moments.

Sufficient, though I've heard better from her.

My personal favorite from St. Vincent: Actor, solidifies her as a serious artist if you didn't already believe so on Marry Me. She builds upon all the elements that makes Marry Me good and brings in the staple St. Vincent sound we hear on her later albums. Actor Out of Work is a hectic rock tune that is just as catchy as it is experimental and the spectacular Marrow really puts St. Vincent on the forefront of Alt-Rock/Pop. Quieter moments like The Party and Just the Same But Brand New are easy to get lost in and shows how she's able to keep that jazz influence amidst the chaos that is Actor. The only gripe I have is that the closing song: The Sequel is so anti-climactic for such a boundary pushing album. Overall, this is a great listen. It's fun, catchy, loud and hectic and all in all, a good time.

I've had a complex relationship with her work. It started with people persuading me to listen to her albums and hell, I don't mind Strange Mercy & her self-entitled but never enough to consider myself invested in what she is doing. Thanks to Actor, today I can say that can consider myself that way. Wow this is massive! It's like Feist meets Sufjan meets Fiona Apple.

Another solid album from st. Vincent. As always, beautifully crafted songs all delivered in that unique way. Probably not quite as focused as, marry me, but still another superb effort from one of the most interesting artists in the world today.

St. Vincent's "Actor" may be her most ambitious work to date. While "Strange Mercy" and "St. Vincent" developed her pop sense as well as built what has rapidly been recognized as her signature style, "Actor" lacked parameters for its songs and did little more (and perhaps less) than its predecessor to appeal to a more general audience. Singles like "Marrow" or "Actor Out of Work" are dizzying and reptilian, gutting the listener with their building sense of peril. "The Party" and "Laughing With a Mouth of Blood" are forerunners of Annie's darker tones being layered into beautiful or simple melodies and instrumentation that are only noted on repeated listens. This was also her last album (aside from the "Love This Giant" collaboration) that utilized her ability to construct songs that abandoned pop for layered majesty in the climax with stand out (and knock out punch tracks) "Black Rainbow" and "Just the Same but Brand New". As much as I continue to admire and garner new types of respect for Annie's career, her shift to beating listeners over the head with the overt darkness of her lyrics as well as the simplification of the songs (although a deceptive simplicity), It saddens me that many of the tools that made "Actor" stand over "Marry Me" have been lost with the later releases.

Very artsy album but bloody hell she is talented. Witty lyricism, tight composition and unbelievably-unique guitar riffs make Annie Clark one of the most underrated musicians of today, and this album just further emphasizes her talent.
Even though it can seem to drag from song-to-song, there are still many strong moments on this album, particularly "Actor out of Work", "Save Me From What I Want" and the confident "Marrow".

She is as adventurous as anyone she's ever played with, but with a sort of ferocity that prevents her from being precious or pretentious. Actor is definitely one of the most creative and bold albums from this year.

A really good album that gets better after every listen.

This was one of my go-to albums for a long time, and I still am amazed at how great this is, even after listening to it for so long. Meticulous, haunting, yet inescapably beautiful. Criminally underrated on this site, and in general.

Your feedback for Actor