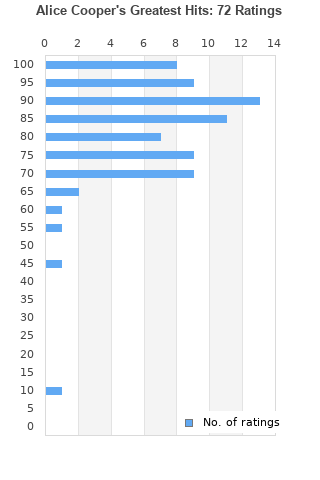 Alice Cooper's Greatest Hits is ranked 11th best out of 38 albums by Alice Cooper on BestEverAlbums.com.

The best album by Alice Cooper is Killer which is ranked number 1625 in the list of all-time albums with a total rank score of 1,066. 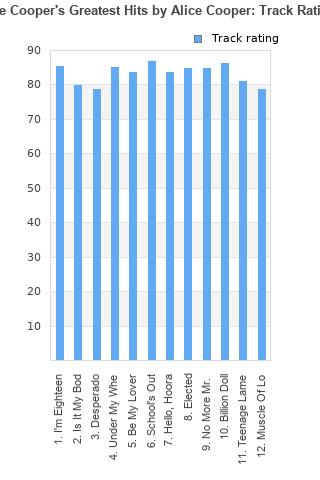 Rating metrics: Outliers can be removed when calculating a mean average to dampen the effects of ratings outside the normal distribution. This figure is provided as the trimmed mean. A high standard deviation can be legitimate, but can sometimes indicate 'gaming' is occurring. Consider a simplified example* of an item receiving ratings of 100, 50, & 0. The mean average rating would be 50. However, ratings of 55, 50 & 45 could also result in the same average. The second average might be more trusted because there is more consensus around a particular rating (a lower deviation).
(*In practice, some albums can have several thousand ratings)
This album is rated in the top 1% of all albums on BestEverAlbums.com. This album has a Bayesian average rating of 82.0/100, a mean average of 82.3/100, and a trimmed mean (excluding outliers) of 83.3/100. The standard deviation for this album is 14.8.

I'm not much for greatest hits records but this really shows how good these songs hold up as singles. This period of Alice Cooper had it all.

I prefer(red) the following complete albums:

Love It To Death, Killer, School's Out, Billion Dollar Babies and Welcome to My Nightmare. The first two were huge faves of mine (not sure how well they've aged). The latter two were camp (Nightmare was a total send-up) but still good. After that .... Cooper was done like dinner. I saw the band live 3 times in the 70s and all of the shows were great.