Something More Than Free (album) by Jason Isbell 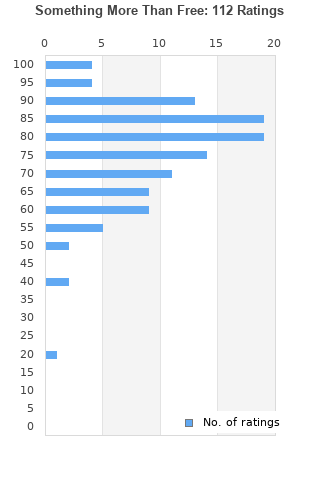 Something More Than Free is ranked 2nd best out of 9 albums by Jason Isbell on BestEverAlbums.com.

The best album by Jason Isbell is Southeastern which is ranked number 1282 in the list of all-time albums with a total rank score of 1,365. 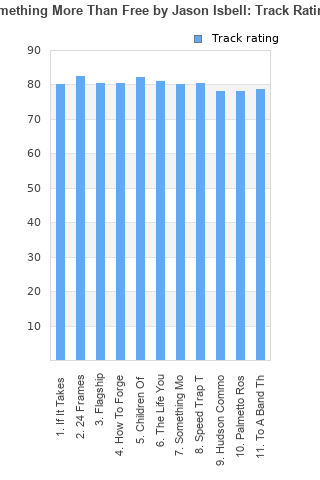 Something More Than Free rankings

Something More Than Free collection

Something More Than Free ratings

Outliers can be removed when calculating a mean average to dampen the effects of ratings outside the normal distribution. This figure is provided as the trimmed mean. A high standard deviation can be legitimate, but can sometimes indicate 'gaming' is occurring. Consider a simplified example* of an item receiving ratings of 100, 50, & 0. The mean average rating would be 50. However, ratings of 55, 50 & 45 could also result in the same average. The second average might be more trusted because there is more consensus around a particular rating (a lower deviation).
(*In practice, some albums can have several thousand ratings)
This album is rated in the top 9% of albums on BestEverAlbums.com. This album has a mean average rating of 76.0/100. The trimmed mean (excluding outliers) is 76.1/100. The standard deviation for this album is 13.9.

Something More Than Free favourites

Something More Than Free comments

A step or two below Southeastern, but a damn fine album, nonetheless.

I'm not the biggest country fan. However I can say this is really good. Hell even great. Just doesn't impress me on a insane level. But I definitely would recommend to anyone that adores country as well to people like me who were never that crazy for the genre to begin with.

I think songs like Children of Children and surreptitiously catchy, accessible and likable songs like 24 Frames make this his best album. What stunningly candid and enjoyable lyrics. You just want to say thank you for writing such great songs.

Although Something More Than Free doesn't quite have the same raw, vulnerable, strangely triumphant energy that Jason Isbell's previous release, Southeastern, had, it nearly makes up the difference with a greater sense of maturity and artistic purpose. These are gorgeously and lovingly crafted, quintessentially American rock songs, my favorite of which has to be "24 Frames," a song of soaring tenderness, with one incredible verse in particular: "This is how you talk to her when no one else is listening / And this is how you help her when the muse goes missing / You vanish so she can go drowning in a dream again." I'm sure this is Isbell's experience being married to a fellow singer-songwriter, Amanda Shires. But it's also about the generosity of spirit that's needed for creative people to maintain loving relationships. Great stuff, Jason. Keep it coming.

One of the best singer-songwriters in the world. Really great lyrics chock full of heartland wisdom for a new millennium.

There's a review that criticizes these songs as mere character sketches in which "very little happens." If that's what you're taking away from these songs, you're just not listening. I've said it before, but his ability to create a whole world in four minutes is masterful.

The arrangements are warm and meticulously crafted, clearly played by the best in the industry. The lyricism is poignant and gives off an aura of quality- this album oozes quality. An overwhelming success, even for an established critical darling such as Isbell.

After the first listen: So much more hope than in Southeastern. I still wouldn't call it gleeful, but more grateful for the strength to deal with the hardships that life brings. No doubt that Isbell is still a beautiful lyricist.

Your feedback for Something More Than Free