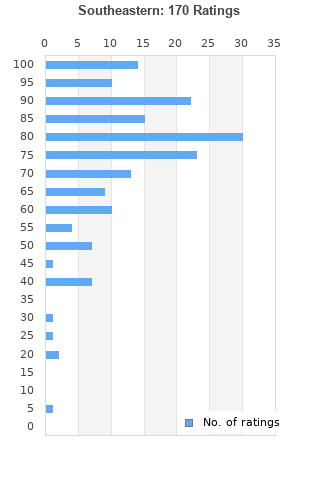 JASON ISBELL: SOUTHEASTERN (CD.)
Condition: Brand New
Time left: 1d 16h 39m 29s
Ships to: Worldwide
£12.89
Go to store
Product prices and availability are accurate as of the date indicated and are subject to change. Any price and availability information displayed on the linked website at the time of purchase will apply to the purchase of this product.  See full search results on eBay

Southeastern is ranked as the best album by Jason Isbell. 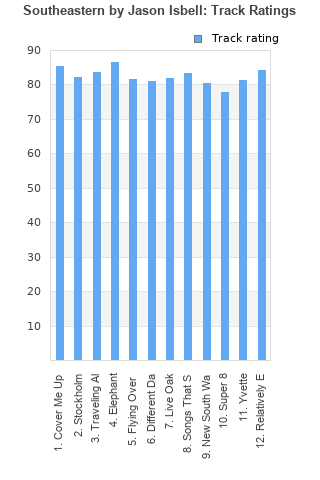 Rating metrics: Outliers can be removed when calculating a mean average to dampen the effects of ratings outside the normal distribution. This figure is provided as the trimmed mean. A high standard deviation can be legitimate, but can sometimes indicate 'gaming' is occurring. Consider a simplified example* of an item receiving ratings of 100, 50, & 0. The mean average rating would be 50. However, ratings of 55, 50 & 45 could also result in the same average. The second average might be more trusted because there is more consensus around a particular rating (a lower deviation).
(*In practice, some albums can have several thousand ratings)
This album is rated in the top 5% of all albums on BestEverAlbums.com. This album has a Bayesian average rating of 76.9/100, a mean average of 76.0/100, and a trimmed mean (excluding outliers) of 77.1/100. The standard deviation for this album is 17.8.

The 2010s ushered in new master songwriters in the Americana Country-folk, including Sturgill Simpson and Valerie June. The prime King and Queen of this new Americana era is undoubtedly Jason Isbell and Amanda Shires, talented songwriters who are bonded in marriage. Shires had a major breakthrough in her "To the Sunset" album in 2018, proving her talent beyond her usual role as supporting musician to Isbell.

Southeastern is unassuming at first. This genre has been flooded with several artists and the genre itself isn't known for its glamorous presentation. After several listens, it becomes apparent that this project was very well thought out and personal. It is very reminiscent of Ryan Adams's "Heartbreaker" LP.

Southeastern and Isbell's follow-ups continue the string of modest genius releases. I personally recommend them all.

Career Highlight: Cover Me Up

Some intensely personal and strong songwriting. Doesn't really appeal to me musically.

Did someone order the modern country classic with ALL THE TEARS???

This album gets a 100% from me. Generally, Im not a Country Music fan, but this guy reinforces the idea that passion transcends everything. Raw emotion drenches this record from top to bottom. Very refreshing.

ONLY giving it a 90, for now. On first listen. But it's hard to find fault at all. And I don't even like Ryan Adams, or at least I didn't think I did. Wor lass has heartbreaker so will have a listen!

Favourite album for years. Southeastern is so darkly beautiful.

This was the album that took Jason Isbell from very good to top of the songwriting hill. These are songs of heartache and addiction, but also profound redemption and gratitude. Isbell's singing has never been stronger, too, as evidenced by the powerful and fantastic opener, "Cover Me Up."

This isn't Ryan Adams? This record reaches the soul damn! A+ MEZ

Amazing voice, amazing song writer. Cover me up is one of my favorite songs of all time.

I second my earlier opinion with my only amendment being that this is the best ryan adams album since "cold roses". Jason Isbell writes understatedly dark, breathtaking tales of life and love and all the wondrously tragic complications therein.

Your feedback for Southeastern