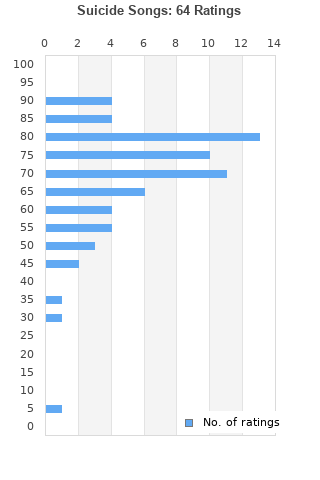 Suicide Songs is ranked as the best album by Money. 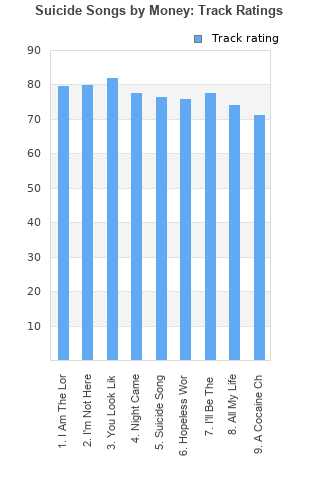 Rating metrics: Outliers can be removed when calculating a mean average to dampen the effects of ratings outside the normal distribution. This figure is provided as the trimmed mean. A high standard deviation can be legitimate, but can sometimes indicate 'gaming' is occurring. Consider a simplified example* of an item receiving ratings of 100, 50, & 0. The mean average rating would be 50. However, ratings of 55, 50 & 45 could also result in the same average. The second average might be more trusted because there is more consensus around a particular rating (a lower deviation).
(*In practice, some albums can have several thousand ratings)
This album has a mean average rating of 69.0/100. The trimmed mean (excluding outliers) is 70.0/100. The standard deviation for this album is 14.8.

Definitely reminds me of The Waterboys.

The psychedelic rock ballads of a hopeless soul

When pressing play on an album with a title such as Suicide Songs, there are certain expectations and agreements being made. As a listener, you’re indirectly stating that you’re ready to wallow in some kind of misery. You’re not seeking an uplifting, upbeat party anthem to put on your summer playlist. On their second LP, Manchester trio MONEY fulfills their obligations to the listener. Within the opening moments, there’s a strong sense of catharsis. A pulsating psychedelic rock swirls with meandering sitar, Jamie Lee’s voice cries out in desperation and despair. By the time he states the words “The world spins inside of me / and I’m going to drown”, it’s already been made clear. As the album continues, the songs remain to be similarly downtempo, emotional, psychedelic ballads with gradual rises and falls.

Grand sweeping arrangements reminiscent of Spiritualized and to a lesser extent Echo & the Bunnymen emphasize this immense hopelessness at times, but also provides an aura of salvation. For all of our desires to bask in tragedy, we’re always searching for the exit signs.

Emotion is Suicide Songs defining trait. Evoking The Waterboys’ Mike Scott, Lee’s voice brings urgency to his dramatic lyrics. There’s a strain, as if worn down by years of crying these words of desperation, but only now having open ears directed towards him.

Musically, Suicide Songs, may be nothing exceptionally groundbreaking, but the execution is nearly flawless and loaded with emotional purpose. It’s exactly what you agreed upon when you pressed play.

FAVORITE SONGS
You Look Like a Sad Painting on Both Sides of the Sky, All My Life, I Am the Lord

"You Look Like A Sad Painting On Both Sides Of The Sky" is easily the best track.

Or hope for the hopeless. Coming on like a folky, early Verve but without the hokey psychedelia, these songs match the passion and the desperation of every busker who knows the power of a strongly strummed guitar or of a song belted out to the heavens. Suicide Songs has a heart as big as Manchester.

Your feedback for Suicide Songs