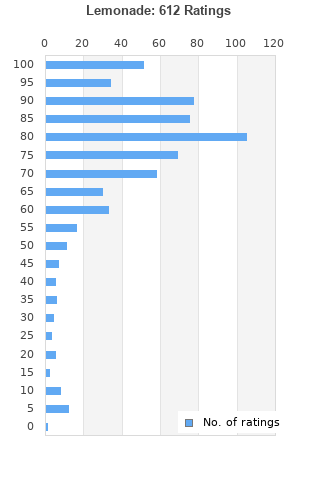 BEYONCE **Lemonade [180 Gram] [Yellow Vinyl] **NEW DOUBLE RECORD LP VINYL
Condition: New
Time left: 1d 10h 53m 51s
Ships to: Worldwide
$28.88
Go to store
Product prices and availability are accurate as of the date indicated and are subject to change. Any price and availability information displayed on the linked website at the time of purchase will apply to the purchase of this product.  See full search results on eBay

Lemonade is ranked as the best album by Beyoncé. 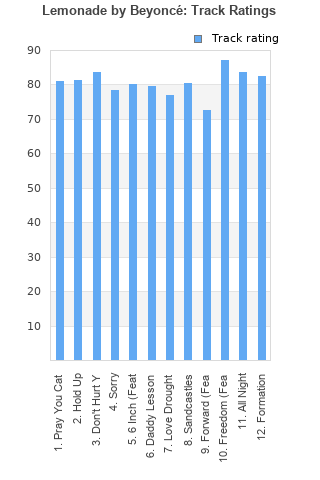 Rating metrics: Outliers can be removed when calculating a mean average to dampen the effects of ratings outside the normal distribution. This figure is provided as the trimmed mean. A high standard deviation can be legitimate, but can sometimes indicate 'gaming' is occurring. Consider a simplified example* of an item receiving ratings of 100, 50, & 0. The mean average rating would be 50. However, ratings of 55, 50 & 45 could also result in the same average. The second average might be more trusted because there is more consensus around a particular rating (a lower deviation).
(*In practice, some albums can have several thousand ratings)
This album is rated in the top 4% of all albums on BestEverAlbums.com. This album has a Bayesian average rating of 77.7/100, a mean average of 75.0/100, and a trimmed mean (excluding outliers) of 77.8/100. The standard deviation for this album is 20.9.

I think this is one of the best albums in mainstream music today, well thought of & carefully produced. I think I'll be waiting to see what she's gonna come up with next.

Surprising. This is the feeling that you have after several listenings of the famous "Lemonade". Because it took me several listening to have an opinion on the astonishing cocktail offered by Queen B. This album is a hymn, a real cry of rage of all that Miss Carter had on the heart: Feminist, Equal, Militant, Powerful. In one word this album is truly soul. Because this album comes from the soul, it comes from the heart. "Lemonade" is without a doubt Beyoncé's most personal record, the deepest and most consistent. And despite these very refined arrangements it breathes a unique and warm atmosphere. Unconventional and amazing, this is without a doubt the best album of the diva, in my opinion. And we can finally guess who is the woman "behind the mask". A Black woman, Strong and Proud who has not decidedly finished to surprise us.

One of the most interesting albums I've heard in a hot minute. Calling LEMONADE "pop" or "r&b" is not exactly wrong, but does not convey the sheer breadth of sounds and styles encompassed by the record. Like "Don't Hurt Yourself," the highlight of the album for me. Rock? Like, kind of. Or "Daddy Lessons," the gospel-country jam-session, sort of. The variety, and yet cohesiveness, of this album makes it one of the best albums of the year.

A modern masterpiece. I love this album. It's Beyoncé's best album.

Not the biggest fan of Beyonce but this album really stands out as a great performance all over. Great lyrics and amazing production.

This album has its high points and its low ones, a more cohesive nature and different editing would have helped it.

Pop can be an amazing genre. And this is a prime example. A modern masterpiece paired with her stunning visual accompaniment. Beyonce is an undoubtedly amazing performer of the arts.

Your feedback for Lemonade