The Harder They Come (album) by Various Artists 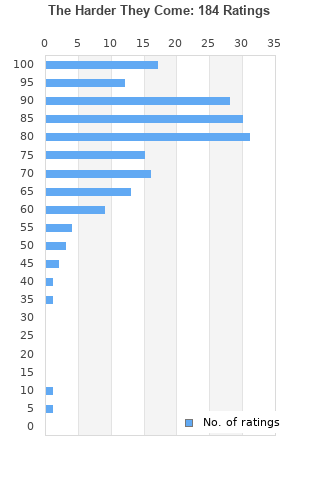 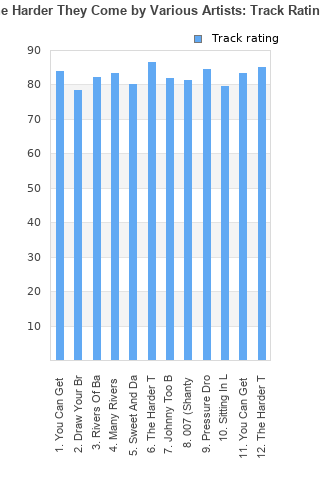 #
Track
Rating/Comments
1.
You Can Get It If You Really Want - Jimmy Cliff
Rating: 83 (26 votes)Comments:

The Harder They Come rankings

The Harder They Come collection

The Harder They Come ratings

Outliers can be removed when calculating a mean average to dampen the effects of ratings outside the normal distribution. This figure is provided as the trimmed mean. A high standard deviation can be legitimate, but can sometimes indicate 'gaming' is occurring. Consider a simplified example* of an item receiving ratings of 100, 50, & 0. The mean average rating would be 50. However, ratings of 55, 50 & 45 could also result in the same average. The second average might be more trusted because there is more consensus around a particular rating (a lower deviation).
(*In practice, some albums can have several thousand ratings)
This album is rated in the top 2% of albums on BestEverAlbums.com. This album has a mean average rating of 80.0/100. The trimmed mean (excluding outliers) is 80.5/100. The standard deviation for this album is 14.9.

The Harder They Come favourites

The Harder They Come comments

THE LIFE OF A REPOMAN IS ALWAYS INTENSE

Many rivers to cross
And it's only my will that keeps me alive
I've been licked, washed up for years
And I merely survive because of my pride - Many Rivers to Cross

Life can throw a lot at you. Sometimes it can just get plain crazy. Ridiculous even. To the point where you cannot even believe it’s really happening to YOU. This shit only happens to other people, right? RIGHT?!

Call it bad karma. Call it a Job-ian test from the Gods. Call it whatever you will. But some of us have to go through a lot more shit than the rest of you lucky fucks. Put simply - life just sometimes sucks. And it can seem totally unfair. And you can do one of of two things when this happens. You can give up! Hurl your fists at the heavens. Cry out to the Gods that this is not even close to a fair fight anymore. That you’ve had enough. That this is inhuman. Numb yourself with scripts, alcohol and whatever drugs you can get your hands on. Curl up on the couch and binge on bad tv and tubs of Chubby Hubby. And say “I’ve had it. Fuck this! Fuck that! I’m out of here.” And I honestly don’t blame anyone who does this. No one but us really knows how frickin’ bad things can really, really get. If you judge these people, I have four words for you - YOU DON’T GET IT! You’ve never been there! You can’t even begin to imagine what they’re going through.

But there’s another option. To rise above! To cross those swollen rivers. To swim on & on. To keep searching for a way across. To try and build a better boat. Despite the impossibilities. Despite the doubters and naysayers. No matter how improbable your situation may seem. Really believe that you are going to cross those rivers. That you are going to build that boat and make it to the other shore. Out of duct tape, spit, willpower and faith. Lots & lots of faith.And that’s where this album comes in. Because no album ever made has such great anthems as this little number. It has THREE anthems that can stare down any others in recorded history and not bat an eye.

Opposition will come your way
But the harder the battle, you see
Is the sweeter the victory now - You Can Get It If you Really Want It

On its surface this is just a wonderfully catchy Motown influenced number that can stuck in your head like cotton candy. But it really nails all the key components you’re going to face in building that boat. In crossing that river. In doing something others say is impossible. First, you are going to face the two Os - obstacles & opposition. Whether it be doctors, family members, a flare in your disease, a broken leg … whatever. Opposition & obstacles are inevitable. Setbacks are going to occur. And they can wear you down. But the key is to keep trying. Keep going. And believing. That you really can get there. But you must believe. But no one completely believes at first either. Especially if you’ve been through the ringer one too many times. And that’s why you must try, try and try, try and try!

So as sure as the sun will shine
I'm gonna get my share now of what's mine
And then the harder they come
The harder they'll fall, one and all - The Harder They Come


Again, notice the positivity. The belief. This is the commonality of all successful people. Whether it be Tom Brady or Ivanhoe "Ivan" Martin. The belief in themselves. The belief that no matter how hard the obstacle, that you can and will overcome it. As sure as the sun will shine!

Grade: A+. I never realized how influential Motown was on Jamaican music until I heard this album. This album has given me a whole different perspective on Jamaican music and music in general. Music can be such a weapon. To fire you up and change your attitude. And even though I highlighted those three legendary anthems, this album hardly stops there. In fact my favorite is actually by some artist I’ve never even heard of before - Scotty. It reminds me of Operation Ivy. I just love the guitar lick and verbal mumbo jumbo that starts it off. This is proto-punk rock at its finest.

This is easily one of the greatest soundtracks of all time and if you can splurge for the deluxe two cd version definitely do it. It further showcases the massive influence that the Motown sound had on Jamaican music with the highlight perhaps being my favorite cover of “I Can See Clearly Now”. That single is worthy of an essay all on its own. It’s going to be a bright, bright sunshiny day!

This 1973 release has probably introduced far more Americans to Reggae than any other ten Reggae discs put together.

Why is an album with 9 ratings in the top 1000? And why are some people's ratings not shown in the ratings list who have commented (with ratings shown)?

A very good collection of songs here. The first one, You Can Get It If You Really Want, was the strongest for me. Most the tracks on this album are very uplifting in their mood and there are few which I would call weak. Harder They Come and Sitting In Limbo are also highlights.

"Many Rivers to cross" is a such an amazing song, I think that it is impossible to sing it poorly.. so many have recorded it..even Linda Ronstadt's version is good.

Your feedback for The Harder They Come