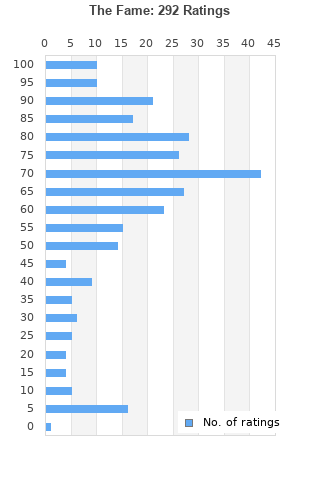 The Fame is ranked 3rd best out of 10 albums by Lady Gaga on BestEverAlbums.com.

The best album by Lady Gaga is The Fame Monster which is ranked number 1441 in the list of all-time albums with a total rank score of 1,226. 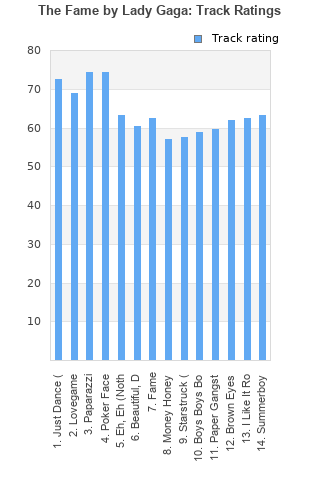 The tracks on this album have an average rating of 64 out of 100 (all tracks have been rated).

Rating metrics: Outliers can be removed when calculating a mean average to dampen the effects of ratings outside the normal distribution. This figure is provided as the trimmed mean. A high standard deviation can be legitimate, but can sometimes indicate 'gaming' is occurring. Consider a simplified example* of an item receiving ratings of 100, 50, & 0. The mean average rating would be 50. However, ratings of 55, 50 & 45 could also result in the same average. The second average might be more trusted because there is more consensus around a particular rating (a lower deviation).
(*In practice, some albums can have several thousand ratings)
This album has a Bayesian average rating of 63.2/100, a mean average of 62.8/100, and a trimmed mean (excluding outliers) of 62.8/100. The standard deviation for this album is 24.7.

This album is an untouchable pop music classic.

A lot of tracks, especially after the middle of the album, could have been omitted.

I only recently rediscovered this and realized that this was likely the first album that I fell in love with as a full product. Gaga's truly had it together since day one. Even on top of the nostalgia value, all the songs still hold up.

Stop the fucking “I’ll admit...” comments, (synth)pop is not a lesser genre. You are just biased if you make such comments, even if you’re rating is quite high. It just shows that you think the artist should be fucking honored that you even considered listening her music, and yes, I see this most often happening with female artists. Not accusing you of anything, just stating the facts.

Lady Gaga has been a very interesting player in the synthpop revival and the development of art pop. But I feel like she often gets more recognition because of her persona; Britney and Kylie had made very quality synth pop at that time, and we’ve already seen some great art pop from artists like Björk and Róisín Murphy. Lady Gaga sounds too clearly as a throwback to synthpop and disco, while it pretty much surprised me to find the disco influence in Kylie’s music, because it is much subtler. And I guess that’s the difference between an artist that makes what he/she just likes to make, and an artist that clearly has an idea from the start like “I wanna sound like this”. And that clearly shines through in tracks where you clearly hear she applies someone else’s style from other artists like “Starstruck”, “Paper Gangsta” (both Uffie) and “Boys Boys Boys” (Britney). The first few songs are very Lady Gaga though, and hence I think this album is still a must to have listened.

Great album that overstays its welcome a little bit.

I get such a David Bowie vibe from Brown Eyes, one of her best if not her best song yet

Your feedback for The Fame