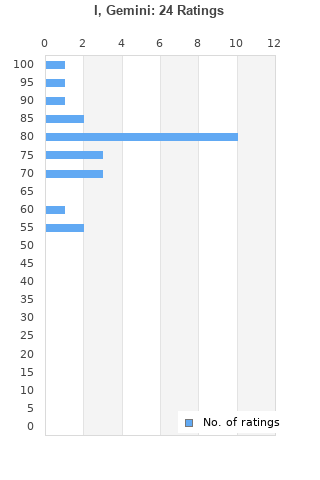 Let's Eat Grandma - I, Gemini - (NEW 12" VINYL LP)
Condition: New
Time left: 2d 23h 30m 12s
Ships to: Worldwide
£19.46
Go to store
Product prices and availability are accurate as of the date indicated and are subject to change. Any price and availability information displayed on the linked website at the time of purchase will apply to the purchase of this product.  See full search results on eBay

I, Gemini is ranked 2nd best out of 2 albums by Let's Eat Grandma on BestEverAlbums.com.

The best album by Let's Eat Grandma is I'm All Ears which is ranked number 2846 in the list of all-time albums with a total rank score of 533. 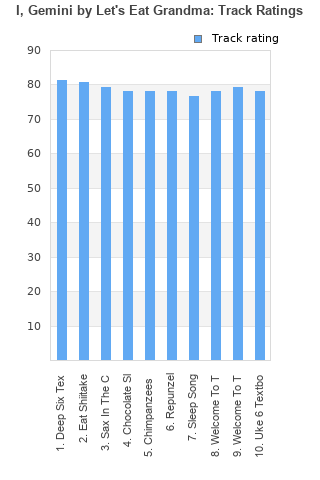 Rating metrics: Outliers can be removed when calculating a mean average to dampen the effects of ratings outside the normal distribution. This figure is provided as the trimmed mean. A high standard deviation can be legitimate, but can sometimes indicate 'gaming' is occurring. Consider a simplified example* of an item receiving ratings of 100, 50, & 0. The mean average rating would be 50. However, ratings of 55, 50 & 45 could also result in the same average. The second average might be more trusted because there is more consensus around a particular rating (a lower deviation).
(*In practice, some albums can have several thousand ratings)
This album is rated in the top 5% of all albums on BestEverAlbums.com. This album has a Bayesian average rating of 76.8/100, a mean average of 78.9/100, and a trimmed mean (excluding outliers) of 78.9/100. The standard deviation for this album is 11.0.

Pretty solid. Start with I'm all Ears, then this one

Perhaps going on a limb here but it's possible to consider this the more anxious, blase and less compositionally refined younger sister of The Milk-Eyed Meander. While it tends to go off on more musical and stylistic whims and their songwriting & playing are definitely a bit more rudimentary than Newsom's, there is this geniune child-like daydream quality to this album that's rather transporting, where even the somewhat uneven correlation of the tracks, the languid intros & outros and often vivid if a bit too melodramatic fairy-tale imagery feels more exciting and welcomely unpredictable than off-putting. A lovely if admittedly inconsistent debut that for it's many virtues still showed they had a little ways to go in the production and songwriting department.

This is one of the most inventive albums of 2016. Clearly more people need to listen to it.In love.

Your feedback for I, Gemini