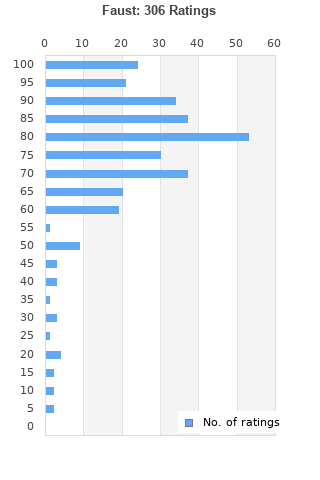 ALBERTO GINASTERA: OVERTURE TO THE CREOLE 'FAUST'; OLLANTAY; PAMPEANA NO. 3; DAN
Condition: Brand New
Time left: 34m 23s
Ships to: Worldwide
$15.14
Go to store
Product prices and availability are accurate as of the date indicated and are subject to change. Any price and availability information displayed on the linked website at the time of purchase will apply to the purchase of this product.  See full search results on eBay

Faust is ranked 2nd best out of 12 albums by Faust on BestEverAlbums.com.

The best album by Faust is Faust IV which is ranked number 718 in the list of all-time albums with a total rank score of 2,600. 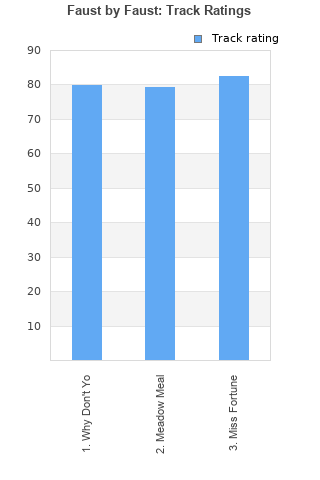 Rating metrics: Outliers can be removed when calculating a mean average to dampen the effects of ratings outside the normal distribution. This figure is provided as the trimmed mean. A high standard deviation can be legitimate, but can sometimes indicate 'gaming' is occurring. Consider a simplified example* of an item receiving ratings of 100, 50, & 0. The mean average rating would be 50. However, ratings of 55, 50 & 45 could also result in the same average. The second average might be more trusted because there is more consensus around a particular rating (a lower deviation).
(*In practice, some albums can have several thousand ratings)
This album is rated in the top 3% of all albums on BestEverAlbums.com. This album has a mean average rating of 76.0/100. The trimmed mean (excluding outliers) is 78.4/100. The standard deviation for this album is 18.5.

A weird drifty art piece of an album that is strangely pleasant.

By turns haunting and hilarious, this debut album is nothing short of pioneering. As one reviewer stated, it is utterly world-building; this isn't just aimless experimental noise. One of the most thoroughly unique sonic statements of the decade.

Impressive sounds/studio work for the time. I'm not a fan,(as in I wouldn't choose to listen to this often)but it definitely tickles my brain and is worth the listen.

Great album. If you told me this album was made by an extraterrestrial life form I might believe it.

Miss Fortune is a great track. Why Don't You Eat Carrots is also great. Even though the sax sounds sometimes a bit off. Meadow Meal is too unfocused for me. It has beautiful parts as well but parts that seem completely out of place. This album showed that Faust had great ideas and gladly they developed them over Faust So Far and The Faust Tapes to release what I think is their best album. Faust IV. Nonetheless Faust (album) is great and an essential album of it's genre.

This was a good listen while I was getting ready to leave this morning. Eating my Marshmallow Maties, drinking coffee and brushing my teeth all went well with Faust.

Listening to Faust is an experience. Rather than simply existing in a space, it builds its own for the listener. As with most avant-garde music, its greatest value is inside the doors it opens.

Three songs are enough to understand what this band was able to produce in 1971. Thanks to bands like this Germany will ever be credited as one of the most innovatory and influential country in the history of modern music. In fact Germany is the homeland of the kraut-rock movement, which includes bands like Faust, Can, Neu and Amon Dull, the very first ones in terms of electronic experimentation and fusion between rock and artificial sounds.

Wazz, I agree with you. Of all the so-called 'Krautrock' bands, Faust are my favourite. I was lucky enough to have seen them play live last summer and it was one of the greatest musical 'events' I've ever witnessed. That's how I perceive the music of Faust - an 'organic' 'event' or work of art in progress, continually moving, never standing still.

There is something really honest and sincere in their approach to their music which is best experienced live. As with 'Trout Mask Replica', 'Faust' touches something very deep within the human psyche in a way that is profound. I think the kind of spontaneity and honesty found in Faust has been lost in contemporary music.

Your feedback for Faust