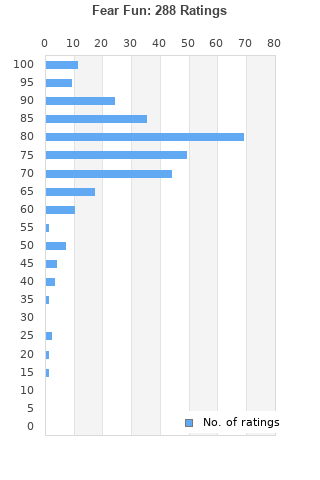 Fear Fun is ranked 3rd best out of 6 albums by Father John Misty on BestEverAlbums.com.

The best album by Father John Misty is I Love You, Honeybear which is ranked number 278 in the list of all-time albums with a total rank score of 6,818. 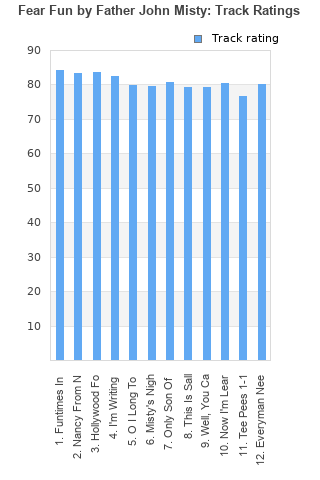 Rating metrics: Outliers can be removed when calculating a mean average to dampen the effects of ratings outside the normal distribution. This figure is provided as the trimmed mean. A high standard deviation can be legitimate, but can sometimes indicate 'gaming' is occurring. Consider a simplified example* of an item receiving ratings of 100, 50, & 0. The mean average rating would be 50. However, ratings of 55, 50 & 45 could also result in the same average. The second average might be more trusted because there is more consensus around a particular rating (a lower deviation).
(*In practice, some albums can have several thousand ratings)
This album is rated in the top 5% of all albums on BestEverAlbums.com. This album has a Bayesian average rating of 77.0/100, a mean average of 76.2/100, and a trimmed mean (excluding outliers) of 77.1/100. The standard deviation for this album is 13.2.

A very chill album that is very easy to listen too and seems to go by very quickly. There are great songs on here and all the songs are intriguing and have brilliant lyrics on them and that is the real strength of the record. There is also quite a lot of catchy and easy to enjoy music on some of the songs as well which create a great combo with the vocal. However, there are some weaker tracks on the album that do seem a little simple and just don't flow as well as others. It is also dips nearer the end and the track quality isn't as good as when the album started. Overall, a great album but the artist has definitely created better records.

Some great songs in here, but overall it gets a bit boring. 7/10.

I saw Father John Misty perform live at the Orange Peel in Asheville, North Carolina, a few months after this album came out. It was one of the most painfully awkward and arrogant live performances I've ever seen. It made me intensely dislike Josh Tillman, and it diminished my appreciation for this album. Still, I can't dent it's one of the great albums of the twenty-first century so far. The songwriting is funny, clever, impeccable, and surprisingly moving, considering it came from a person as deeply off-putting as Tillman. "Hollywood Forever Cemetery Sings" is an amazing song about having sex in a graveyard.

There was Jim Morrison and now is him.

One of the easiest listens (in the best way possible) that I can think of. Lyrics are brilliantly entertaining. Catchy melodies all over. To top it all off, you get fantastic moments of sincerity from a guy that sings about drug use, sex, and the environmental impact of making an album. All it takes is a few listens and you'll find yourself humming Hollywood Forever Cemetery Sings all the damn time. Look out for his upcoming release (in a few days).

I've heard he puts on a hell of a show as well. Seeing him in two weeks, so I'm excited to find out for myself!

Father John Misty is the moniker for former Fleet Foxes drummer Joshua Tillman. Knowing this helps you to understand the sound of this album better as it sounds a fair bit like a Fleet Foxes album. This album, however, does not sound like an exact copy of a Fleet Foxes album, but you can hear the similarities. The loads of reverb and the sometimes minimalistic sound. Tillman does a very good job on this album both lyrically and musically. The songs are interesting and the lyrics are engaging. It’s overall a very good indie folk rock album and I would highly recommend checking it out. It’s not perfect, but it’s very good and especially if you’re a fan of Fleet Foxes, check it out.

It is a great listen to chill to.

Great songwriting here! Something you can put on and let all of your troubles drift away. The majesty in a long line of so called simple "relaxing" albums.

a touch of crowded house here and there. promising

Your feedback for Fear Fun