The best album credited to The Strokes is Is This It which is ranked number 23 in the overall greatest album chart with a total rank score of 36,782.

The Strokes is ranked number 30 in the overall artist rankings with a total rank score of 52,857.

The following albums by The Strokes are ranked highest in the greatest album charts:

This may not be a complete discography for The Strokes.This listing only shows those albums by this artist that appear in at least one chart on this site. If an album is 'missing' that you think deserves to be here, you can include it in your own chart from the My Charts page!

6
(from the album First Impressions Of Earth)
7.
The Adults Are Talking
Rating: 90 (296 votes)Comments:

4
(from the album The New Abnormal)
Show more
N.B. Tracks must have received at least 3 ratings to appear in the above list. 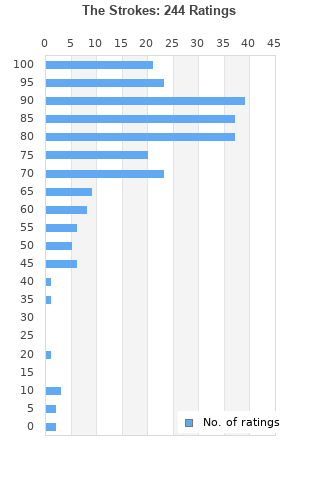 Rating metrics: Outliers can be removed when calculating a mean average to dampen the effects of ratings outside the normal distribution. This figure is provided as the trimmed mean. A high standard deviation can be legitimate, but can sometimes indicate 'gaming' is occurring. Consider a simplified example* of an item receiving ratings of 100, 50, & 0. The mean average rating would be 50. However, ratings of 55, 50 & 45 could also result in the same average. The second average might be more trusted because there is more consensus around a particular rating (a lower deviation).
(*In practice, some artists can have several thousand ratings)
This artist is rated in the top 3% of all artists on BestEverAlbums.com. This artist has a Bayesian average rating of 80.1/100, a mean average of 77.9/100, and a trimmed mean (excluding outliers) of 80.4/100. The standard deviation for this artist is 19.0.

i dont get it, plain and simple...

This album is exactly what you’d hope for at this point in their career. It perfectly combines their essential sound with their ambition. Their essential sound got lost a bit on recent albums in their ambition to challenge themselves. It made for interesting progressions In their sound without being able to nail a classic recording. I think they might have nailed it with this one.

The strokes are one of the best alt rock acts to have emerged in 00s along with Interpol, The National, Arctic monkeys and Arcade fire. Julian Cascablancas, the principal songwriter of the band, has a great sense of vocal melody IMO and that's one of the things that sets them apart from dozens of bands who tried to copy/borrow their sound. Very few artists/bands can claim to have their debut album to be as good and influential as Is this it. I think the album has aged pretty well too. It was followed by Room on fire which has better songwriting IMO and is more polished. I won't say it too different from is this it though. First impressions of earth is quite underrated and has some pretty great tunes and has more melancholic elements going on, which I absolutely dig. Angles was probably the first album that had inputs from everyone in the band and it was around this time tension among the band members started to emerge. That probably has to do with the fact that Julian didn't find the inputs interesting and wanted to have the creative control over the band. It still is a pretty decent album. There are few songs i just can't get into on this record though. Their fifth album Comedown machine, was mostly a contractual obligation and is probably the least liked album among the fans. I don't think even the band likes it. It's pretty different from their conventional sound and sounds like a throwback to 80s music. It has some pretty catchy tunes though. The band took a break after that and band members started their own projects. I think Julian Cascablancas's side project "The Voidz" deserves a mention here. They have released two pretty amazing albums that have more experimental sound and you should definitely check them out if you haven't. Virtue was one of the best records of 2018 IMO. Seven years of hiatus and the band is back with their new album "the new abnormal". Talk about a relevant title. I have to say I wasn't expecting much from the band at this point and I was thinking this is gonna be one of things when band gets together just for the sake of money. I am ecstatic to say I couldn't have been more wrong. The strokes have delivered. The new abnormal is indubitably their most ambitious record and have more diversity than any of their previous records. I feel it's a mixture of convectional Strokes sound and The voidz. It's such a good feeling when one of your favorite bands surprises you with such a good album after all this time. The strokes still got it!

I think they're the epitome of cool in the alt-rock scene of the new millennium. Their garage rock sound is an A+, their 80s new wave sound infused with today's alt-rock is a B+. People don't want to look past Is This It?, but I believe Room On Fire is a more polished album that doesn't drag in the way that Is This It?'s trite sound tends to do. Angles is very much underrated and Comedown Machine is a pretty solid throwback album to 80s alt. First Impressions is messy but they have 7 or so solid tunes on it.

They are very similar to Interpol. Masterpiece level debut, decent sophomore album and then a ton of mediocrity.

These guys will always have a special place in my heart.

I don't get why everyone thinks they got so much worse? No, sure, non of the other albums are on Is This It's level, but seriously, they are still fantastic albums. Angles is so so underrated, and Comedown Machine has some great tunes too.

Your feedback for The Strokes