Is This It (studio album) by The Strokes 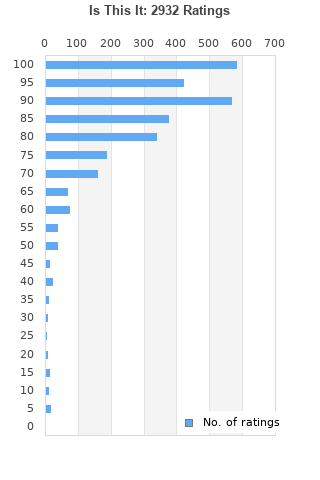 Is This It is ranked as the best album by The Strokes. 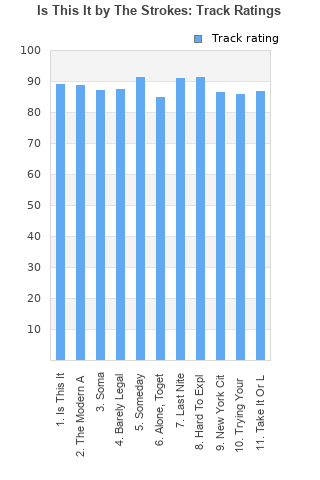 Is This It rankings

Is This It collection

Is This It ratings

Rating metrics: Outliers can be removed when calculating a mean average to dampen the effects of ratings outside the normal distribution. This figure is provided as the trimmed mean. A high standard deviation can be legitimate, but can sometimes indicate 'gaming' is occurring. Consider a simplified example* of an item receiving ratings of 100, 50, & 0. The mean average rating would be 50. However, ratings of 55, 50 & 45 could also result in the same average. The second average might be more trusted because there is more consensus around a particular rating (a lower deviation).
(*In practice, some albums can have several thousand ratings)
This album is rated in the top 1% of all albums on BestEverAlbums.com. This album has a Bayesian average rating of 85.9/100, a mean average of 84.5/100, and a trimmed mean (excluding outliers) of 85.9/100. The standard deviation for this album is 15.9.

Is This It favourites

Is This It comments

Stands alongside the best post-punk rock albums of all time from the New York scene as it's influence on guitar music through the 2000's was gigantic.

A simple, fun back-to-basics postpunk album with pop sensibilities, still it is not one of the 23 best albums of all time honestly.

Had this for well over a decade. Thought it was alright but nothing to write home about as it all just blended together. Until recently. A lengthy car journey where this was the only CD in the car caused me to listen to it 3 times in a row. It then clicked. Even though the songs have a similar sound and structure they all have there own uniqueness. It's very catchy and enjoyable right throughout. There are no dud tracks. It's gone up in my standings. A very decent album indeed.

So laid back, so effortless, so cool. It's a great debut, I think it's a little overrated on here but I can't deny it is quality. My favourites are Last Nite, Hard to Explain and Take It Or Leave It.

As the musical world was headed towards an increasingly digital/electronic future, The Strokes said “not so fast, my friend.”

From the opening beats of the record, The Strokes aggressively and repeatedly prove that a simple band can still make interesting and lasting songs with guitars, stripped down drums, and an ever-present distortion effect.

This is as much a punk statement as the Ramones in the 1970s. Not a wasted song on the album, lots of catchy riffs and lyrics, and very few albums do as good a job of transporting the listener into a specific time and place…here, specifically, NYC at the turn of the century.

A crowning achievement from the early 2000’s indie renaissance.

In my opinion, Is This It is the catchiest album ever recorded by any artist. Every time I listen to it, I'll have several songs and melodies stuck in my head for days.

The simplicity of this album is to its benefit

Your feedback for Is This It