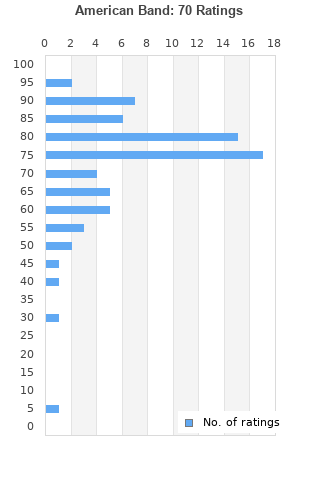 Drive-By Truckers - American Band [New CD]
Condition: Brand New
Time left: 2d 20h 29m 25s
Ships to: Worldwide
$16.14
Go to store
Product prices and availability are accurate as of the date indicated and are subject to change. Any price and availability information displayed on the linked website at the time of purchase will apply to the purchase of this product.  See full search results on eBay

American Band is ranked 5th best out of 17 albums by Drive-By Truckers on BestEverAlbums.com.

The best album by Drive-By Truckers is Southern Rock Opera which is ranked number 2161 in the list of all-time albums with a total rank score of 759. 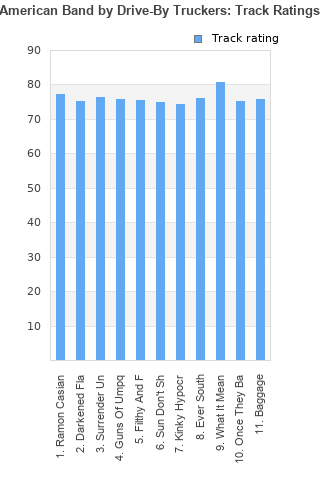 Rating metrics: Outliers can be removed when calculating a mean average to dampen the effects of ratings outside the normal distribution. This figure is provided as the trimmed mean. A high standard deviation can be legitimate, but can sometimes indicate 'gaming' is occurring. Consider a simplified example* of an item receiving ratings of 100, 50, & 0. The mean average rating would be 50. However, ratings of 55, 50 & 45 could also result in the same average. The second average might be more trusted because there is more consensus around a particular rating (a lower deviation).
(*In practice, some albums can have several thousand ratings)
This album has a Bayesian average rating of 73.8/100, a mean average of 72.9/100, and a trimmed mean (excluding outliers) of 73.9/100. The standard deviation for this album is 14.8.

DBT return to the fray, this time writing about political/ human rights events that America faces in the 21st century. There are a lot of political pleas here. I don't think they want us to change any minds here, they just want us to listen and think about what is going on in current events. The two primary songwriters are in good focused form here, and though this record can't compare to their classics in the early 2000s, it's still worth while for any casual fan, no matter what political opinions you hold dear.

Track Pick: "What it Means"

Their first album since their Isbell-assisted days to bring back memories of their heavier, tougher, more immediate songwriting of their heyday, American Band has both a clarity of vision as well as a driving, rootsy edge that gives both gravitas and emotional power to what's perhaps their most overtly political album to date. A catchy but bruising rallying cry against the rather sorry state of the nation, and their best work in over a decade.

A modern observation of America with classic Southern Rock lyricism and instrumentation. Great song writing. One of the most politically charged albums of the year.

Your feedback for American Band