A Blessing And A Curse (studio album) by Drive-By Truckers 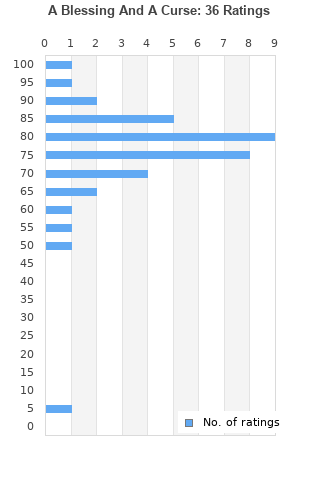 DRIVE-BY TRUCKERS - A BLESSING AND A CURSE
Condition: New
Time left: 21h 26m 39s
Ships to: Worldwide
£19.90
Go to store
Product prices and availability are accurate as of the date indicated and are subject to change. Any price and availability information displayed on the linked website at the time of purchase will apply to the purchase of this product.  See full search results on eBay

A Blessing And A Curse is ranked 6th best out of 18 albums by Drive-By Truckers on BestEverAlbums.com.

The best album by Drive-By Truckers is Southern Rock Opera which is ranked number 2179 in the list of all-time albums with a total rank score of 752.

Listen to A Blessing And A Curse on YouTube 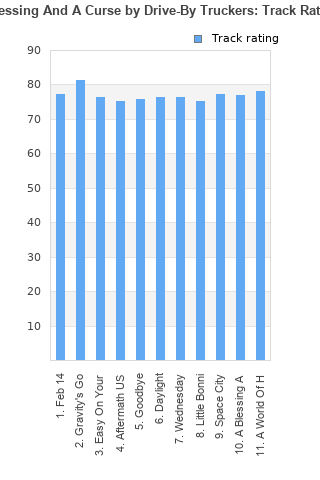 A Blessing And A Curse rankings

A Blessing And A Curse collection

A Blessing And A Curse ratings

Rating metrics: Outliers can be removed when calculating a mean average to dampen the effects of ratings outside the normal distribution. This figure is provided as the trimmed mean. A high standard deviation can be legitimate, but can sometimes indicate 'gaming' is occurring. Consider a simplified example* of an item receiving ratings of 100, 50, & 0. The mean average rating would be 50. However, ratings of 55, 50 & 45 could also result in the same average. The second average might be more trusted because there is more consensus around a particular rating (a lower deviation).
(*In practice, some albums can have several thousand ratings)
This album is rated in the top 16% of all albums on BestEverAlbums.com. This album has a Bayesian average rating of 75.2/100, a mean average of 73.6/100, and a trimmed mean (excluding outliers) of 75.8/100. The standard deviation for this album is 16.5.

A Blessing And A Curse favourites

A Blessing And A Curse comments

While not quite as ambitious as the trilogy of albums that preceded it--Southern Rock Opera, Decoration Day, and The Dirty South--A Blessing and a Curse is still a very worthy Drive-By Truckers album, one that is both personal and hard edged. It's hard a produce a bad album, or even a mediocre one, when you have a songwriting triple threat as strong as Patterson Hood, Jason Isbell, and Mike Cooley, although the fragmentedness of this album suggests that maybe there was too much talent in this band for this formula to remain sustainable. No matter. A lot of this is great, especially the heartbreaking "Little Bonnie," a slice of Hood family history that encapsulates pain and shame in a way that feels completely frank and utterly shattering.

They're always good, but as time goes on, they have less and less new material and substance to offer.

It's a but uneven, especially when compared to the two that preceded it. Listening to it all these years later, you can hear Jason Isbell moving in a different sonic direction than Patterson Hood and Mike Cooley. Isbell's departure after this record opened the door for a great solo record for him, and a return to form for the remaining members of this band.

You can't go wrong with this band, especially on the albums featuring Jason Isbell.

Your feedback for A Blessing And A Curse