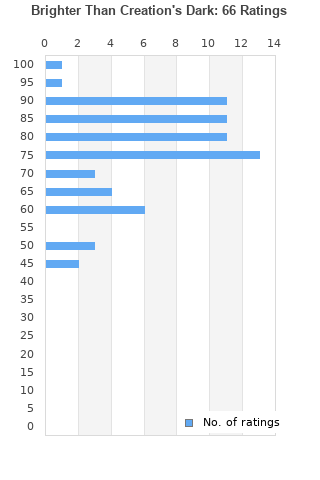 Drive-By Truckers - Brighter Than Creations Dark [New Vinyl LP] Ltd Ed
Condition: New
Time left: 2d 7h 57m 46s
Ships to: Worldwide
$28.33
Go to store
Product prices and availability are accurate as of the date indicated and are subject to change. Any price and availability information displayed on the linked website at the time of purchase will apply to the purchase of this product.  See full search results on eBay

Brighter Than Creation's Dark is ranked 4th best out of 18 albums by Drive-By Truckers on BestEverAlbums.com.

The best album by Drive-By Truckers is Southern Rock Opera which is ranked number 2179 in the list of all-time albums with a total rank score of 752. 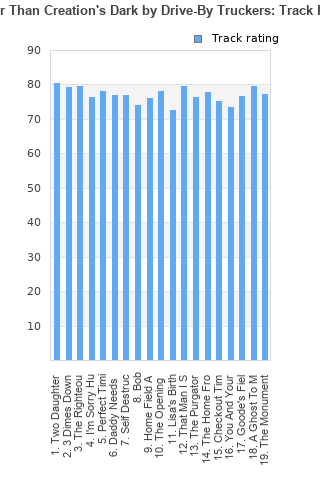 Rating metrics: Outliers can be removed when calculating a mean average to dampen the effects of ratings outside the normal distribution. This figure is provided as the trimmed mean. A high standard deviation can be legitimate, but can sometimes indicate 'gaming' is occurring. Consider a simplified example* of an item receiving ratings of 100, 50, & 0. The mean average rating would be 50. However, ratings of 55, 50 & 45 could also result in the same average. The second average might be more trusted because there is more consensus around a particular rating (a lower deviation).
(*In practice, some albums can have several thousand ratings)
This album is rated in the top 9% of all albums on BestEverAlbums.com. This album has a Bayesian average rating of 76.0/100, a mean average of 76.4/100, and a trimmed mean (excluding outliers) of 76.4/100. The standard deviation for this album is 12.8.

The departure of a primary songwriter--in this case the inimitable and immensely talented Jason Isbell--usually signals the dissolution, or at least the gradual demise, of a band. In the case of Drive-By Truckers, though, it signaled a kind of rebirth with Brighter Than Creation's Dark, a renewal made possible on the strength of their two remaining band leaders Patterson Hood and Mike Cooley, as well as the emergence of Isbell's ex-wife Shonna Tucker, who takes over as songwriter and on lead vocals for several tracks. The result is a tour de force, led by Hood's "The Righteous Path," which could easily be a companion piece to "Lookout Mountain" from The Dirty South: an uneasy meditation on what it means to be a middle-class suburban white man in the contemporary American South.

An interesting record. This band has gone through some changes. There is some great and not so good material on here. Focus people.

The length definitely hurts this one. You take out the six weakest tracks and you have a 4.5 star collection of 13 songs. As it is, it does have a couple weak spots. However, the rest of the songs are solid. My favorites are the instant Cooley classic "Three Dimes Down" and Hood's pair of anti-war tracks, "That Man I Shot" and "Home Front."

If you like their music, I suggest to listen to an album of Admiral Freebee.

The best thing to come out of the South since Lynyrd Skynyrd. This album shows that Patterson Hood and Mike Cooley can still bring the goods, no matter who else is in the band with them. A rarity...a band that survives despite constant lineup changes. Great writing, great playing. A great album by a great band.

Southern fried rock, country & bluegrass-tinged with some nice yarns spun. I finally delved further into their back catalogue as a result of this album. At 19 tracks, the album goes on a bit long but also comes with many highlights, including "two daughters and a beautiful wife", "the righteous path" ("i don't know god, but i fear his wrath"), "perfect timing" (probably the best upbeat track), "daddy needs a drink" (send one to me too!), "bob", "lisa's birthday" and "you and your crystal meth". A lot of these songs are like character sketches.

Rock and roll fans who have yet to delve into the Drive By Truckers' entire catalog have no idea what they are missing. They rock incredibly hard, are alternately smart, funny and righteous, feature multiple talented songwriters, and put on a killer live show.

Your feedback for Brighter Than Creation's Dark