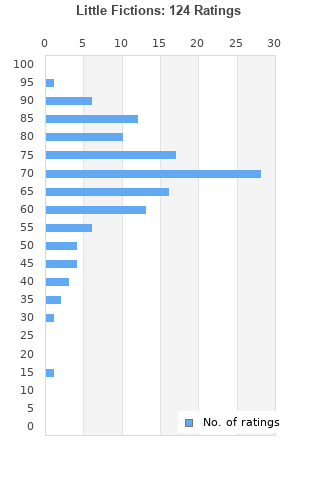 ELBOW/LITTLE FICTIONS
Condition: New
Time left: 3d 4h 33m 35s
Ships to: Worldwide
$37.53
Go to store
Product prices and availability are accurate as of the date indicated and are subject to change. Any price and availability information displayed on the linked website at the time of purchase will apply to the purchase of this product.  See full search results on eBay

Little Fictions is ranked 7th best out of 17 albums by Elbow on BestEverAlbums.com.

The best album by Elbow is The Seldom Seen Kid which is ranked number 510 in the list of all-time albums with a total rank score of 3,753. 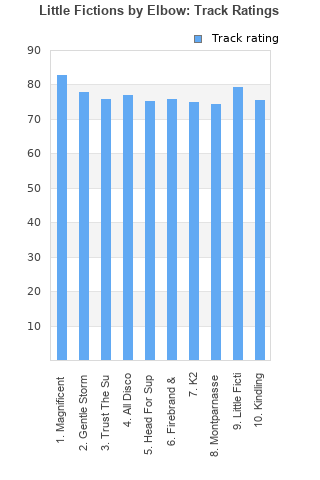 Rating metrics: Outliers can be removed when calculating a mean average to dampen the effects of ratings outside the normal distribution. This figure is provided as the trimmed mean. A high standard deviation can be legitimate, but can sometimes indicate 'gaming' is occurring. Consider a simplified example* of an item receiving ratings of 100, 50, & 0. The mean average rating would be 50. However, ratings of 55, 50 & 45 could also result in the same average. The second average might be more trusted because there is more consensus around a particular rating (a lower deviation).
(*In practice, some albums can have several thousand ratings)
This album has a Bayesian average rating of 69.1/100, a mean average of 68.3/100, and a trimmed mean (excluding outliers) of 68.7/100. The standard deviation for this album is 13.9.

So I've given it a bit more time and attention. The highs became really high and the lows turned out to be growers/slow burners I wasn't in the mood for. Fantastic, even if a bit less energetic.

I've listened to this album many times and it's all a bit ordinary for my liking . Pleasant enough, neat enough, competent sure but not much else .Trust The Sun goes ok as does Montparnasse. But after 52 minutes Little Fictions wears out its welcome with a bunch of mostly forgettable tracks ?I'm surprised it's ranked 33rd best album in 2017 , clearly there are plenty of punters out there who disagree with my assessment

Man, they really got old

As someone who loves Elbow, and who show's up for pretty much anything they do, I can't complain one bit. This is maybe my favorite record of theirs since The Seldom Seen Kid. In a few listens, it might be up there with Asleep in the Back. Can't recommend enough.

3rd listen... album is a bit Jekyll and Hyde for me. One song I really dig and then the next song is typical high quality stuff from Elbow, but a bit boring. Still overall pretty good.

A very good album, not a great album, but I prefer it to their last album Take Off and Landing of Everything. I'd rather the band get a bit more experimental they seemed to be falling into a pattern. I prefer their earlier albums.

This album grows on me every time I listen to it. Right now third best Elbow album on my list (only "Seldom seen kid" and "Leaders of the free world" higher), and I wonder where it will go in the future.

I haven't heard their previous stuff, so I dint really have anything to compare this to; And I loved this album. The title track is excellent.

Very good album, nice feeling throughout and finding it very enjoyable. Magnificent is a fantastic opener.

Your feedback for Little Fictions