Whatever And Ever Amen (studio album) by Ben Folds Five 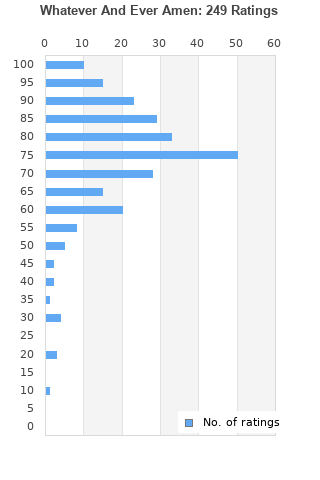 Ben Folds Five ‎– Whatever And Ever Amen CD Album 550 Music 1997
Condition: Like New
Time left: 8h 45m 54s
Ships to: Worldwide
£2.30
Go to store
Product prices and availability are accurate as of the date indicated and are subject to change. Any price and availability information displayed on the linked website at the time of purchase will apply to the purchase of this product.  See full search results on eBay

Whatever And Ever Amen is ranked as the best album by Ben Folds Five. 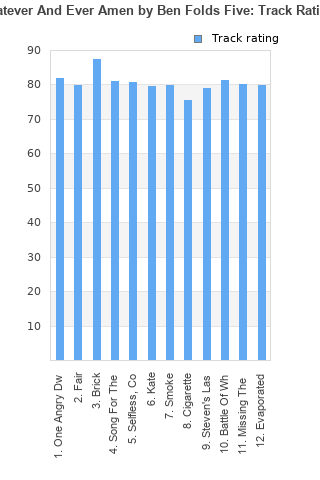 Whatever And Ever Amen rankings

Whatever And Ever Amen collection

Whatever And Ever Amen ratings

Rating metrics: Outliers can be removed when calculating a mean average to dampen the effects of ratings outside the normal distribution. This figure is provided as the trimmed mean. A high standard deviation can be legitimate, but can sometimes indicate 'gaming' is occurring. Consider a simplified example* of an item receiving ratings of 100, 50, & 0. The mean average rating would be 50. However, ratings of 55, 50 & 45 could also result in the same average. The second average might be more trusted because there is more consensus around a particular rating (a lower deviation).
(*In practice, some albums can have several thousand ratings)
This album is rated in the top 8% of all albums on BestEverAlbums.com. This album has a Bayesian average rating of 76.1/100, a mean average of 75.2/100, and a trimmed mean (excluding outliers) of 76.2/100. The standard deviation for this album is 15.8.

Whatever And Ever Amen favourites

Whatever And Ever Amen comments

That feeling when you're in quarantine and want something that you know will light you up and make you smile.

This album is never not fun. At a very boring desk job I had I listened to this a ton. I would imagine my desk a piano and couldn't not move to it, and somehow it made me more productive? Every song is a winner - Brick kinda body slams me emotionally and feels disruptive given the nature of most of the other tunes, but that's fine. Really such a good time.

Song for the Dumped? One Angry Dwarf? Selfless, Cold and Composed? Stone cold classics here. Recommended for anyone who likes fun and wants to have a good time in their ears.

Phenomenal piano playing, but just didn't strike a chord with me.

Great fun a joy to listen to. Picks me up every time I listen to it. He makes the piano rock. Song For The Dumped made me laugh out loud "Give Me Money Back You Bitch !" brilliant.

Great music, great lyrics, a lot of fun. And not a guitar in sight. Ben Folds best.

While all over the place, it feels somehow to move and flow naturally. Great album.

I love this album. It lacks polish, and the subject matter is mostly juvenile, but its high energy and has a great straight-ahead rock sound mixed with a jazz-influenced harmonic vocabulary.

Packed with fun piano-based tunes with nary a clunker in sight, "one angry dwarf" starts the disc off like a raucous party which "Fair" ("all is fair in love") continues (where Ben concludes "Not only am I right / I'm lonely and I'm right") with a nice bass fadeout, but most people know it as the album with the hit, "brick". (You know: "she's a brick and i'm drowning slowly...") Like "lightning crashes" (by Live), it's another catchy tune about abortion, reflecting his feelings over one he & his HS gf had. "smoke" ("all the sadness, all this rage / throw this book away") and "evaporated" have just as beautiful, if not better, arrangements. No need for guitars, because "song for the dumped" RAWX blasting an ex (like "so you wanted to take a break / slow it down some and have some space? / F*CK YOU TOO! / Give me my money back, you b*tch!"..."and don't forget / to give me back my black t-shirt". HAHA. i love the rolling piano in "selfless, cold and composed" and the playful piano in "kate" and the delicate piano accompanying ben's vocal haze in "cigarette". But Ben shines in the playful numbers as well, like "steven's last night in town" (with fun harmonies) and "battle of who could care less".

Your feedback for Whatever And Ever Amen