Time Out Of Mind (studio album) by Bob Dylan 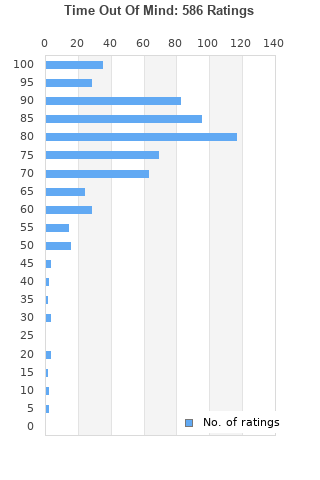 Time Out Of Mind is ranked 8th best out of 74 albums by Bob Dylan on BestEverAlbums.com.

The best album by Bob Dylan is Highway 61 Revisited which is ranked number 26 in the list of all-time albums with a total rank score of 35,606. 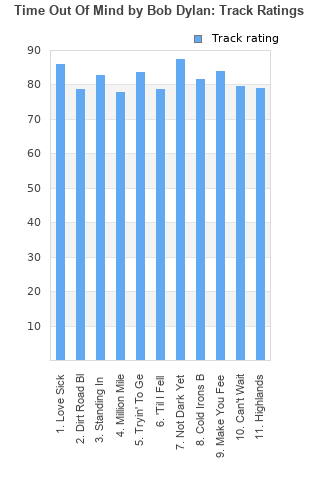 Time Out Of Mind rankings

Time Out Of Mind collection

Time Out Of Mind ratings

Rating metrics: Outliers can be removed when calculating a mean average to dampen the effects of ratings outside the normal distribution. This figure is provided as the trimmed mean. A high standard deviation can be legitimate, but can sometimes indicate 'gaming' is occurring. Consider a simplified example* of an item receiving ratings of 100, 50, & 0. The mean average rating would be 50. However, ratings of 55, 50 & 45 could also result in the same average. The second average might be more trusted because there is more consensus around a particular rating (a lower deviation).
(*In practice, some albums can have several thousand ratings)
This album is rated in the top 2% of all albums on BestEverAlbums.com. This album has a Bayesian average rating of 79.2/100, a mean average of 78.1/100, and a trimmed mean (excluding outliers) of 79.3/100. The standard deviation for this album is 15.0.

Time Out Of Mind favourites

Time Out Of Mind comments

Really enjoyed this project. Love Sick was my favourite

Album of the year, 1997. just ahead of Urban Hymns, OK Computer, The Boatman's Call.

A great album from Uncle Robert.

Very atmospheric album with great production by Daniel Lanois. There are some wonderful bluesy sounds on this one and "Make You Feel My Love" is one of the most beautiful songs I've heard by Mr. Dylan. This is definitely one of Bob's best efforts.

It's actually all that and more. This is one of Dylan's absolute masterworks. For me, it rivals Blonde on Blonde for the best album of his career (and is on the short list for best album of all time). I hope Dylan will collaborate with Lanois again because both of the albums they have done together are some of the best of his career.

Dylan's still got it. That humor, paired with the biting honesty about life and mortality, is still alive and well inside him. It might be sung by a voice that sounds like a congested chain-smoker, and it might be sung over the top of a very unique instrumental sound, but it works all the same. Every track on here, despite some of their simplicity, has something really nice to offer. Each one is a slow burner, in such a way that the five minute and the fifteen minute songs feel the same length if you aren't paying too much attention. The instrumentation probably contributes to this, in its hazy way. Soaked in reverb and distant organs. I quite enjoy it. Its the kind of sound that can just be soaked in, and works better the longer it goes, culminating in the absurdly simple yet absorbing Highlands. This feels like one of those albums I will be coming back to my whole life, for a little taste of that bluesy serenity.

Very emotional set, and his voice has definitely gotten much more grittier. "Make you feel my love" is outstanding.

Your feedback for Time Out Of Mind