Perfect From Now On (studio album) by Built To Spill 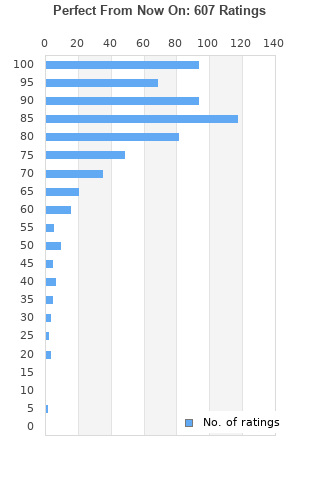 Built To Spill ‎– Perfect From Now On Warner Bros. Records ‎– 163900-1 2007 NEW
Condition: New
Time left: 3d 2h 31m 41s
Ships to: Worldwide
$28.50
Go to store
Product prices and availability are accurate as of the date indicated and are subject to change. Any price and availability information displayed on the linked website at the time of purchase will apply to the purchase of this product.  See full search results on eBay

Perfect From Now On is ranked as the best album by Built To Spill. 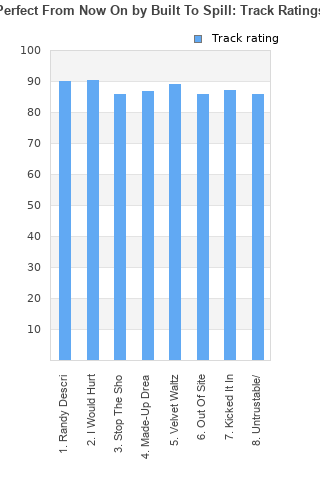 Perfect From Now On rankings

Perfect From Now On collection

Perfect From Now On ratings

Rating metrics: Outliers can be removed when calculating a mean average to dampen the effects of ratings outside the normal distribution. This figure is provided as the trimmed mean. A high standard deviation can be legitimate, but can sometimes indicate 'gaming' is occurring. Consider a simplified example* of an item receiving ratings of 100, 50, & 0. The mean average rating would be 50. However, ratings of 55, 50 & 45 could also result in the same average. The second average might be more trusted because there is more consensus around a particular rating (a lower deviation).
(*In practice, some albums can have several thousand ratings)
This album is rated in the top 1% of all albums on BestEverAlbums.com. This album has a Bayesian average rating of 84.3/100, a mean average of 83.1/100, and a trimmed mean (excluding outliers) of 84.5/100. The standard deviation for this album is 15.4.

Perfect From Now On favourites

Perfect From Now On comments

Modest Mouse would go on to perfect the formula laid out by Built to Spill, though Perfect From Now On is still a crazy good indie rock album.

I feel like I only just NOW fully "got" this album. What a masterpiece. Saw Built to Spill perform this entire album live 12 years ago. Just wish I fully appreciated and loved this album like I do now. Damn good show by the way.

Ten times the size of jupiter

Much more interesting than Keep it Like a Secret.

Wish these guys had the same exposure as bands like Modest Mouse because they are just as good.

It combines indie and noise rock in a really awesome way. The combination of experimentation with traditional indie music leads to a fantastic sound. There are some great moments with the string sections and the guitar played in reverse on "Unstrustable/Part 2 (About Someone Else)". The lyricism is great as well. I love the way Doug Martsh structures his lyrics. It gives each song a dynamic sense of purpose and direction. Not only this, but they're very poetic and authentic sounding. At times, this album feels conversational. This adds a significantly more personal element to it, which adds so much volume and dimension to an already personal and introspective album. I was captivated from the first lyrics of "Randy Described Eternity", and to be honest I've rarely heard eternity described better than how Randy describes it.

Your feedback for Perfect From Now On