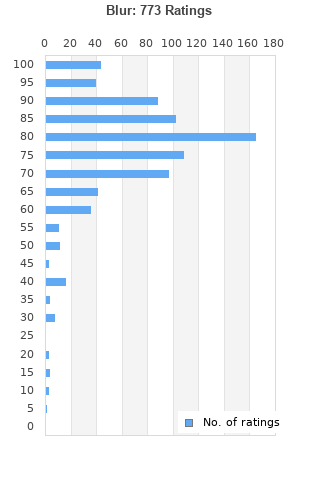 (HI178) Deep Blue Something, She Is - 1998 CD
Condition: Like New
Time left: 8m 19s
Ships to: Worldwide
£3.45
Go to store
Product prices and availability are accurate as of the date indicated and are subject to change. Any price and availability information displayed on the linked website at the time of purchase will apply to the purchase of this product.  See full search results on eBay

Blur is ranked 3rd best out of 21 albums by Blur on BestEverAlbums.com.

The best album by Blur is Parklife which is ranked number 206 in the list of all-time albums with a total rank score of 9,085. 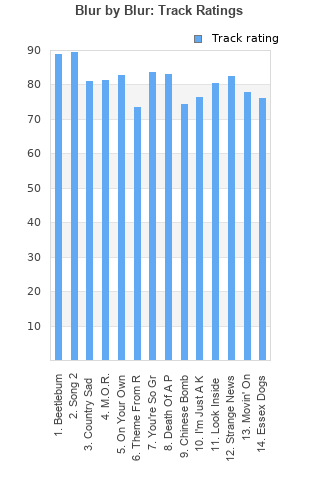 Rating metrics: Outliers can be removed when calculating a mean average to dampen the effects of ratings outside the normal distribution. This figure is provided as the trimmed mean. A high standard deviation can be legitimate, but can sometimes indicate 'gaming' is occurring. Consider a simplified example* of an item receiving ratings of 100, 50, & 0. The mean average rating would be 50. However, ratings of 55, 50 & 45 could also result in the same average. The second average might be more trusted because there is more consensus around a particular rating (a lower deviation).
(*In practice, some albums can have several thousand ratings)
This album is rated in the top 3% of all albums on BestEverAlbums.com. This album has a Bayesian average rating of 77.9/100, a mean average of 77.0/100, and a trimmed mean (excluding outliers) of 78.0/100. The standard deviation for this album is 14.6.

Blur at their peak.

One of the most underrated albums of the 90s.

Blur the album demonstrates how Blur the band were one of the more consistent and innovative groups of the 90s.

Top Tracks: "On Your Own", "You're So Great", "Look Inside America"

My favorite album of theirs, Blur decided to experiment some with this one, abandoning their britpop roots, and went for a more lo-fi sound, giving hints as to what Gorillaz would become, especially with ''On Your Own.''

Better than their 2 previous efforts in my opinion, but there are still some weak songs that ruin a bit the album for me. 7.7/10.

At the beginning, I thought I was going to really like this album. And it's likable enough, but I grew tired of the sound by the end.

I find tracks 3 & 9 genuinely quite hard to listen to....which is unusual for me and Blur, but then there's the cracking M.O.R. Love the quite trippy sounding On Your Own, too, but then Theme From Retro is a downer, and You're So Great really isn't. I was never a massive fan of the singles from this album, and that follows through with the album. Some of their best album tracks, and some of their worst. Bit too up and down and 'different' for me.

Your feedback for Blur