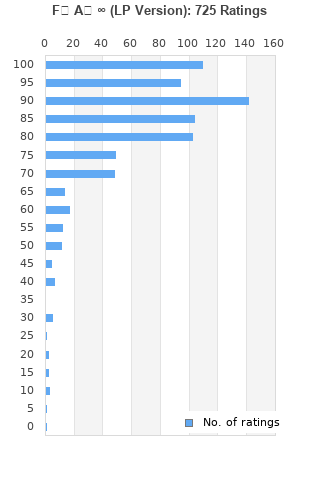 F♯ A♯ ∞ (LP Version) is ranked 2nd best out of 10 albums by Godspeed You! Black Emperor on BestEverAlbums.com.

The best album by Godspeed You! Black Emperor is Lift Yr. Skinny Fists Like Antennas To Heaven which is ranked number 87 in the list of all-time albums with a total rank score of 16,947. 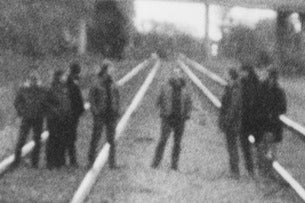 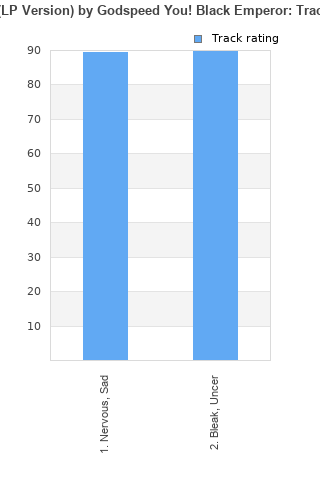 Rating metrics: Outliers can be removed when calculating a mean average to dampen the effects of ratings outside the normal distribution. This figure is provided as the trimmed mean. A high standard deviation can be legitimate, but can sometimes indicate 'gaming' is occurring. Consider a simplified example* of an item receiving ratings of 100, 50, & 0. The mean average rating would be 50. However, ratings of 55, 50 & 45 could also result in the same average. The second average might be more trusted because there is more consensus around a particular rating (a lower deviation).
(*In practice, some albums can have several thousand ratings)
This album is rated in the top 1% of all albums on BestEverAlbums.com. This album has a Bayesian average rating of 84.4/100, a mean average of 83.3/100, and a trimmed mean (excluding outliers) of 84.6/100. The standard deviation for this album is 15.5.

While it may not reach the incredible heights of the acclaimed Lift Yr Skinny Fists Like Antennas To Heaven, that doesn’t take away from the pure mastery at work in this debut album. The starter track, The Dead Flag Blues is all that you want in a GY!BE album. The static, radio frequency like noises, the sounds of everyday events like car doors opening that make it sound like you are eavesdropping in a vacant and post apocalyptic world and, best of all, you have the perfected timing of an instrumental build up to some other worldly crescendos of chaotic music. Following this up, you have the extremely sinister East Hastings. A single, eerie guitar line sets up a very dark, frantic and explosive rabbit hole of music for GY!BE to explore. The result is simply fantastic. It is hard to explain, but GY!BE have the ability to make instruments more emotionally charged. For example, the violins at the start of Providence are some of the most haunting, yet sad and isolated violins you will hear in music. As well as this, the simple guitar strings being plucked on the highlight East Hasting sound so sinister and so purposeful. It is truly a unique art that few have mastered, and what an incredible art to have at your disposal. This is a must listen for all music fans.

A fantastic album that you really grow to love with the more listens you have. The dark and foreboding atmosphere that really captivates and sucks you in the longer you listen to the album. This is created by each of the songs being allowed to be slowly built up and create tension from the delicate instrumentation. The music itself is also of an extremely high quality and each instrument is allowed is own moment to shine. This is an album that you really have to take your time with and have some patience as it took me a few listens to truly see the genius behind the record and once I did I just sat there and was lost in the music. Overall, this is well worth a listen and while it may be their second best record it is still a masterpiece.

I honestly prefer this to LYSFLATH. Don't get me wrong, LYSFLATH is amazing, but something about this record just speaks to me.

Just as good if not better than LYSFLAtH.

Who needs meditation when you have this

I love it the mood of the ending of something big and the dark melodies and the words inspire me.

2 songs (or 3 depending on your edition) but 5 STARS

One of the best post-rock albums I've heard, better then LYSFLATH and on par with Soundtracks For The Blind.

Not as great or impressive as Lift Your Skinny Fists, but just as emotional and artistic...

Like all the pain, sadness and misery in the world packed into one beautiful album. The album has an ongoing theme about the world's end, told through some amazing spoken word. The music reflects this and has this feeling of helplessnes. An extremely depressing, but amazing album.

A funny thing I've noticed is that allot of people's (including my) first reaction is something along the lines of "eh, kinda boring. Just sounds like a bunch of people noodling on their instruments." Then the more you listen to it the more you see the beauty of it and five listens later your opinion is more like the followed: "This is godamn masterpiece, holy shit!".