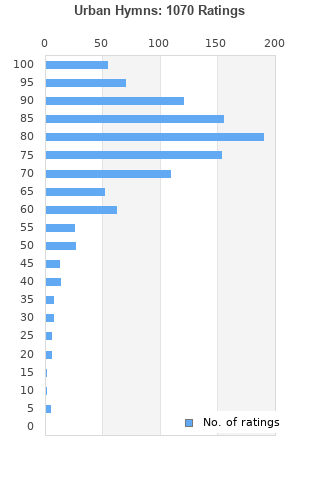 Urban Hymns is ranked as the best album by The Verve. 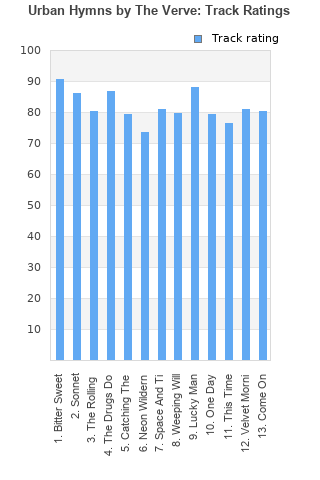 Rating metrics: Outliers can be removed when calculating a mean average to dampen the effects of ratings outside the normal distribution. This figure is provided as the trimmed mean. A high standard deviation can be legitimate, but can sometimes indicate 'gaming' is occurring. Consider a simplified example* of an item receiving ratings of 100, 50, & 0. The mean average rating would be 50. However, ratings of 55, 50 & 45 could also result in the same average. The second average might be more trusted because there is more consensus around a particular rating (a lower deviation).
(*In practice, some albums can have several thousand ratings)
This album is rated in the top 4% of all albums on BestEverAlbums.com. This album has a Bayesian average rating of 77.3/100, a mean average of 76.4/100, and a trimmed mean (excluding outliers) of 77.3/100. The standard deviation for this album is 15.7.

A great album. Despite being overplayed, Bittersweet Symphony and The Drugs Don't Work are still great. Weeping Willow is such an underrated song, my favourite off this album and one of my favourites of all time. Lucky Man is number two for me, followed by Catching The Butterfly and The Rolling People. Neon Wilderness is a 2 minute interlude basically.

Bitter Sweet Symphony may quite possibly be my favorite song of all time. Sonnet, The Drugs Don't Work and Lucky Man are incredible as well. Overall though, I think this album is a bit overstuffed, especially towards the end, a lot of filler following absolute killer. If it were cut down to about 8 or 9 tracks at about 45 minutes, I'd probably talk about it as one of my all time favorites.

Good record. Best songs are in the begin of the album. Lucky Man is the only great song in the second part.

You could see that the Verve were leading up to something special from their previous albums, but this knocked it out of the park. Any attempt at a follow up would be a dissapointment, so good job they didn't

Britpop's softer and most eloquent side. A songbook for the disenfranchised, Urban Hymns is beautiful from start to finish, capturing the disgruntled tinge of its contemporaries and presenting it in a conversational and delicate attire. It's a flawed masterpiece, too long and too soft for its own good in places, but it's hard to deny how reassuring and how comforting Richard Ashcroft's words are.

I have a lot of sentiment with this record. It came out just around the time I was born, and the CD copy I still play in the car all the time is the same as the one my parents bought shortly after its release; Lucky Man inadvertently soundtracked a lot of big moments in my life, and very aptly too I must add; the album has opened me up to a hell of a lot of other 90s alternative bands, and continues to shape my taste to this day.

It's for those reasons that I can forgive the slow pacing and dragged feel that others pick out. Urban Hymns packs the depth and approachability that I crave on occasion - a healthy dose of slightly dreamy alt rock, with enough 90s guitar riffs for all the family and a diorama of melancholic, politically tinged lyrics - and has been there for me enough to have earned a prized place among my collection. A flawed masterpiece for sure, but like all flawed masterpieces, it's what you see in it that matters most.

The great songs are great, but everything seems to go on too long and the arrangements start to get confusing after a little while.

Your feedback for Urban Hymns